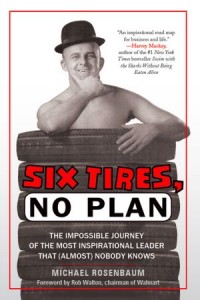 Whenever we talk about the successes of big retail chain stores or the brilliance of its founders, Walmart and its founder Sam Walton often comes to mind. Almost no one you ask would mention the name Bruce Halle. “Bruce who?”, you ask. Bruce Halle is the founder of Phoenix, Arizona-based Discount Tire, the world’s largest independent tire retailer with over 800 stores across continental United States. Oh, and Halle is counted amongst Forbe’s richest people.

In the book “Six Tires, No Plan: The Impossible Journey of the Most Inspirational Leader That (Almost) Nobody Knows“, author Michael Rosenbaum pieces together the Bruce Halle story and attempts to look at how the tire magnate built his empire from just six tires. Put together from interviews with Halle’s family, staff and business partners, the biography chronicles the success story of a man who grew up from very humble beginnings but through grit, providence and sheer determination managed to become of the country’s most respected business leaders.

As the title of the book shows, billionaire Halle first started his business with just six tires at the age of 30. Over the years he would slowly grow his business from just that single store. And it will probably shock you to know that Discount Tire never had a layoff since its inception over 50 years ago, and increased its revenue every single year.

But the key takeaway from the book was that Halle never really focused on building a business. He was really far more concerned about building people. Halle saw expansion – the adding of new stores and regions – as a way to groom his people, where he can promote capable employees and let them share in the company’s success. Much of the book is dedicated to how much Halle invested in his people – the way he inspired, disciplined, cajoled, encouraged and rewarded them – and how much of his own personal wealth he shared with them. Employees would wax lyrical about how Mr. Halle would “pay it forward”, presenting them with a check to help tide over a difficult period, for example.

“Six Tires, No Plan” is also laced with many lessons for the small business owner. There are lessons on people management – for example Discount Tire and Halle makes sure that key management positions are filled by tire jockeys i.e. those who started from the bottom, and only promotes store managers from within. You’ll read how Halle used customer service to differentiate his company selling essentially a commodity product. Retailers, especially, will learn some important lessons like to focus on your core business instead of branching out on seemingly complementary businesses but ending up worse for it.

All in all “Six Tires, No Plan” is a great blueprint that showed how one entrepreneur used his gut, faith, humility, generosity and plenty of hard work to succeed in business and in life. It’s a great read for any entrepreneur – current, aspiring or otherwise.