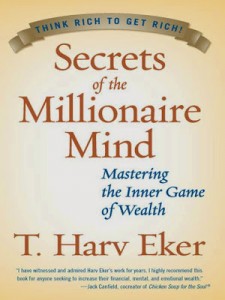 Why are some folks blessed with riches while others struggle to make ends meet? What is the magic formula to wealth?The answer, according to renowned millionaire guru T. Harv Eker, is found in one’s money blueprint. In his bestselling book, “Secrets of the Millionaire Mind: Mastering the Inner Game of Wealth“, Eker urges us to change our personal money blueprint and reprogramme the way we think, feel and act in order to achieve mastery over our wealth, attain financial freedom, and lead more meaningful lives.Sounds too good to be true?Well, initially I was a little sceptical about his claims. However, having read through his book, I was surprised by how much the bulk of its contents connected with me.Liberally laced with “wealth principles”, enriching declarations and “Millionaire Mind” actions, “Secrets of the Millionaire Mind“ is divided into two parts:

Part 1 examines how our money blueprint is manifested by our “programming”. This, in turn, leads to thoughts, feelings and actions that culminate in either positive or negative financial results, i.e. P–>T–>F–>A=R  (where P = Programming, T = Thoughts, F = feelings, A = Actions, and R = Results)Our programming is conditioned in three primary ways:

To change our wealth, we need to attract the right vibes by changing how our minds are conditioned to think. This is where part 2 comes into play.

Comprising 17 “Wealth Files” which are kind of like money mantras for us to chew on and memorize, the second part of the book provides lots of takeaways. Some of these maxims were surprisingly practical. Let me list them down and highlight those that especially resonate with me:

The first 5 wealth files seem related to the “Law of Attraction” that is popularized by the book “The Secret” by Rhonda Byrne. The key idea here is to visualise in your mind the wealth that you’d like to have, believe that its real, and work towards programming your mind to think in a different way.

Personally, I’m not sure if this is a good idea since we should minister to the less fortunate. I suppose we should still reach out to the poor without being unduly influenced by the negativity of others.

Isn’t this totally true? I mean, who are the ones with the time to play golf, travel on luxurious holidays, or take sabbaticals from their work?

This is probably the most valuable “wealth file” to lodge into your cranium. To grow your net worth, Eker teaches us to increase our income (especially passive income), commit to savings, grow our funds through investments, and simplify our lifestyles.

Another invaluable tip. This reminded me of the Parable of the Talents in the Bible, and is related to the habit of investing one’s money.

These last two maxims are related to one’s attitude towards risk and life long learning. It is true that the wealthiest folks around are usually those who dare to take risks, and are also those who are constantly learning from both their successes and their mistakes.

A light, breezy and fast-paced read, “Secrets of the Millionaire Mind” provides lots of food for thought. Beyond the Wealth Files, the book is also packed with truckloads of rich sayings. Some of my favorite quotes include the following:

While certain sections of the book came with useful, practical advice, much of what Eker espoused seem to be more common sense than profound. A born and bred salesman, Eker isn’t shy with planting “sales pitches” throughout the book, asking readers to sign up for his various wealth creation workshops and programmes.Once you get past the hustle, however, I do find that the book offers genuinely useful advice in paving one’s path to prosperity. Then again, being willing to promote oneself is a part and parcel of thinking and acting like a millionaire. Have you attended T. Harv Eker’s workshops or read his book? I’d love to hear what you think.