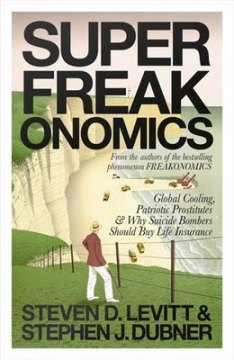 Tackling the fields of behavioral economics, criminology, psychology, sociology and other fields, Superfreakonomics examines taboo topics and sheds new light – and answers – while challenging conventional wisdom. Reading through the easily digestible volume, one learns why walking drunk is more dangerous than driving drunk (shorter average number of miles before accidental death), why department store Santas are like prostitutes (seasonal demand), and how capuchin monkeys actually behave like humans when given the right monetary incentives!

Backed by oodles of statistics and research findings – Levitt’s a data crunching economist by training – the book cites how microeconomics can often play critical roles in seemingly unrelated areas. In the sensationally titled Why Should Suicide Bombers Should Buy Life Insurance?, we’re taught that would-be terrorists are unlikely to have savings account, withdraw money from ATMs on a Friday, or buy life insurance (since they don’t cover acts of terrorism). We also learn from hospital records that the doctor you’re assigned to in an ER ward – regardless of their seniority – have limited influence on your recovery rate.

The chapter on how simple solutions can avert tragic problems (The Fix is in – and Its Cheap and Simple) particularly resonated with me. It’s fascinating to learn that in the pre-microbial discovery days (before Louis Pasteur’s germ theory), a simple act like doctors washing their hands frequently can prevent deadly diseases like puerperal fever from happening in maternity wards. One also learned that automobile child seats only work well for toddlers two years or below. Older kids were equally safe (or unsafe) using adult safety belts with or without an additional seat.

Perhaps the most surprising chapter of all was the one on Global Warming. Here, the writers thumbed their nose at Al Gore’s assertions that carbon dioxide is the principal culprit behind global warming, and offered instead a radical way to reduce atmospheric temperatures. The solution? Pump sulphur dioxide – the same noxious stuff emitted by volcanoes which actually cause global cooling – way up into the stratospheric layer! Citing the work of Intellectual Ventures (IV) founded by Nathan Myhrvold, the authors explained why incentives or disincentives are needed to change human behaviors when negative externalities are involved.

If you enjoyed authors like Malcolm Gladwell and Dan Ariely, “SuperFreakonomics” by Levitt and Dubner will appeal to you. While their approach is probably more scientific than Gladwell (another New York journalist), the intellectual titillation gained from reading the books is probably similar.