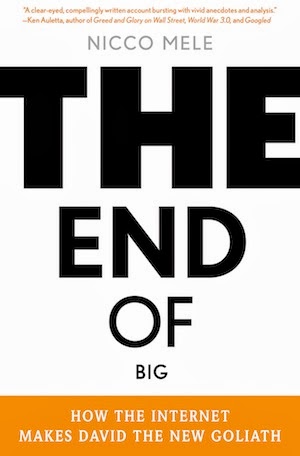 By now, everybody agrees that the Internet is the biggest and most disruptive force in the 21st century. It switches our world order and democratizes power like nothing before.Every aspect of our lives – the information we consume, the governments we vote for, the way we work, the way we learn, and the way we enjoy – is influenced by the Web.According to “The End of Big: How the Digital Revolution Makes David the New Goliath” written by Harvard’s Nicco Mele, the biggest change isn’t in how we lead our lives. Rather, it is how the Net’s ubiquitous reach and radical connectivity ushers in the death knell of big institutions like governments, media, conglomerates and even Hollywood.Written in an entertaining and breezy fashion, “The End of Big“ is divided into nine chapters. Each cover the Internet’s empowering effects on individuals, entrepreneurs, activists and terrorists, adorning them with new capabilities to defeat and disable the strongholds of traditional behemoths. The first, Burn It All Down, sets the stage. It chronicles the history of computers and the Internet. Started by “nerds” who embrace radical libertarian ethics of “burning it all down” and “information wants to be free”, the Internet’s beginnings were rooted in a radical anti-establishment worldview which became embedded in its technologies.While sections covering Big News and Big Fun weren’t particularly new (who hasn’t heard of the major presses retrenching staff en masse or of Kickstarter and YouTube allowing amateur artistes to override Hollywood), the ones covering topics like politics and government were pretty insightful.I was particularly intrigued by how Mele managed to raise US$7 million for Howard Dean’s political campaign through the creation of a base-ball bat visual for his campaign brand and compelling political storytelling. Through the gripping experiences gleaned in those early days, political campaigners went on to mount more sophisticated fund-raising activities involving platforms like ActBlue – a Web service which raises funds for Democrats running for the Oval office. On a slightly darker note, the chapters on Big Armies and Big Government warned global powers how fragile peace and stability can be. Through social media platforms like Twitter, Facebook, YouTube and blogs, terrorists play a “hide-and-seek” game which makes them virtually invisible to military forces.With mesh networks allowing smartphones and computers to connect with each other without needing a wireless base station, dictators’ threat to “shut down the Internet” and quell political uprisings (think Arab Spring) now rings hollow.My favourite chapter is probably the one on Big Companies. Here, we learn how technologies provided by Square allows any entrepreneur to process credit card payments using an iPhone, and how crowd sourcing, cloud computing and 3-D printing could up the ante in favour of the artisanal craftsman (think Etsy, Kickstarter and Quirky). While ideas like relying wholly on community farming for our food may be somewhat far-fetched, I love the idea of collaborative consumptionand its positive impact on our environment.Ending on an optimistic note, Mele encourages us to “acknowledge small as our future but simultaneously rediscover and embrace values such as limited government, the rule of law, due process, and individual freedoms of religion, speech, press and assembly.”He proposes to do this through the following:1) Revise institutions to be more amenable and responsive to individuals;2) Demand serious, thoughtful and informed leadership;3) Develop new ways to bring together the networked, individual power of radical connectivity and the direction-setting inspirational leadership necessary for change;4) Imagine in ever-finer detail what future institutions will look like;5) Strengthen and re-imagine local community; and6) Take control of the Even Bigger platforms (ie Facebook, Google, Twitter, Amazon, etc) that constitute our digital commons.Admittedly, some of Mele’s pronouncements are overtly dystopian. While universities may be losing ground to online learning networks (like the Shah Academy), I don’t think that parents are going to release their vice-like grip on getting their kids to college anytime soon.It may also be unrealistic to expect indie film producers to produce a blockbuster like Lord of the Rings without the old boys’ network (and money) of Hollywood.Having said that, I believe that the world is indeed changing, ushered by the ubiquity and reach of the Internet. Youths these days barely read the papers. Many increasingly distrust big institutions.With this in mind, our future may perhaps be a mix of big and small – a mashup of global and local institutions collectively embracing the power of radical connectivity.