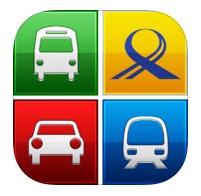 Commuting in Singapore can get tricky especially during peak hour traffic. To save precious time and optimize their travel routes, many a tech-savvy, smartphone-toting Singaporean would rely on various mobile applications to check on information ranging from bus arrival timings to available car park lots in a certain area. Some of these commute-related mobile apps are official ones provided for by local transport operators; a fair number are third-party applications put together by independent developers using open data from local authorities.

The Singapore Land Transport Authority (LTA) has put together an integrated mobile application called MyTransport.SG – available for both iOS and Android – that combines many transport-related features into a single app, aimed at enabling commuters, motorists and even cyclists in the country to check relevant, real-time traffic information to plan their journeys.

We look out some of the key features that commuters may find interesting: 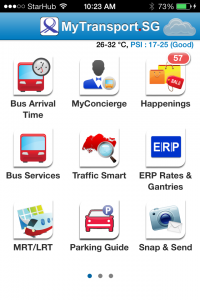 For drivers headed to various vehicular expressways, the traffic camera lets you take a peep at the traffic conditions on all the main highways, including the Woodlands Checkpoint to Johor in Malaysia, as well as the Sentosa Gateway towards Sentosa Island.

Rather than waiting for local radio to report on various traffic chokepoints due to traffic jams or vehicle breakdowns, simply check traffic news to know which roads to avoid.

Equally important? News on roadworks currently occurring throughout the island – when we checked there were 38 locations across Singapore being worked on.

However much we hate paying a toll for using the roads, knowing exactly where the Electronic Road Pricing (ERP) gantries are located and how much we’re expected to pay at a certain time helps with journey planning. 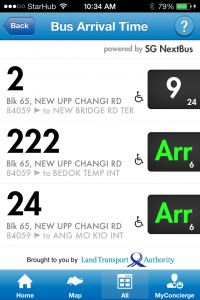 Bus commuters are probably familiar with IRIS, the official bus arrival mobile app from Singapore’s largest bus operator SBS. The problem with IRIS, of course, is that it doesn’t contain data from its main competitor SMRT. The bus arrival timings feature in MyTransport.SG, however, does. It also works far smoother than IRIS.

Rather than taking a photo and then emailing LTA regarding road defects, the Snap & Send feature lets you easily report road infrastructure feedback to LTA, so you can inform them on issues such as potholes on roads, faulty streetlights and obstructed signage, directly from your mobile device.

For the cycling enthusiasts among us, MyTransport.SG also includes information on various cycling paths and park connectors around Singapore. Possibly the most useful part of this feature is the ability to see the cycling routes on the map. Currently only established cycling paths and park connectors are included; hopefully this can be extended to include other cycle-friendly roads in the future.

Other features include shuttle bus and premium bus information such as pickup points and fares, ability to search for the nearest MRT or LRT station, find taxi stand locations around the island, weather updates and even the latest Certificate of Entitlement (COE) prices. In all, MyTransport.SG combines almost everything you need to know to get from one point to another across Singapore.