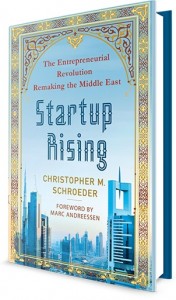 While the world has over the past few years been riveted on the revolutionary civil uprising that’s been taking the Middle East by storm called the Arab Spring, there’s been a far more silent – and likely as important – revolution taking place there that might ultimately do more to change the face of that region. Where there’s been the overthrowing of governments, mass protests and even outright civil war, there’s… entrepreneurship. “Startup Rising: The Entrepreneurial Revolution Remaking the Middle East“, written by seasoned U.S. internet executive and venture investor Christopher M. Schroeder, looks at how a wave of entrepreneurial activity – especially tech entrepreneurship – is sweeping across that part of the world.

Schroeder has put “Startup Rising” together from traveling to the region – Dubai, Cairo, Amman, Beirut, Istanbul, and even Damascus – and speaking with dozens of intrepid entrepreneurs trying to make change in a culture fraught with difficult cultural, legal and social barriers regarding entrepreneurship. And what he finds is incredibly encouraging – he shares many, many stories of young entrepreneurs challenging the status quo, limited technological infrastructure and governmental lethargy to fulfill their dreams, and at the same time plug the many gaps that clearly exist in the market.

One of the more surprising observations that Schroeder makes is the fact that a significant number of these Middle Eastern change makers are actually women, in a culture where their talents and skills have often been overlooked, and their participation in many aspects of society has been largely frowned upon. In fact, according to Schroeder, startup events in the Middle East regularly see more female participation than even those held in the United States – a staggering revelation.

Similarly Schroeder looks at various other factors that’s been helping shape the region’s technological and entrepreneurial overhaul, such as the role of big technology players like Google, Intel, Cisco, Yahoo, LinkedIn and PayPal making significant investments in the region despite the uncertainty, as well as how regional and international and private equity firms and venture capitalists have been operating in the various ecosystems. And while “Startup Rising” does touch on the thorny issue of religion, it’s more to help the reader understand and appreciate how religion have shaped the Middle Eastern perspective towards entrepreneurship and business.

“Startup Rising” is an excellent read for those involved with or interested in global entrepreneurship ecosystems, and especially relevant for those who intend to build businesses or expand into the region. Just a word of warning for those who fall into the latter category – Arab entrepreneurs already understand the latent potential of their birthplaces, and in many cases are well-positioned  to rebuild the region’s historical reputation as a center of technology, learning and economic opportunity.