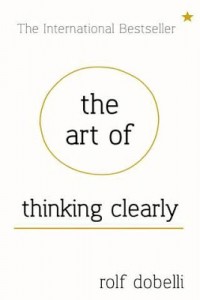 You’ve heard the saying “to err is human and forgive divine”.

What you may not know, however, is that us Homo sapiens have been hardwired over the millenia to be illogical, distorted in our perception of reality, and inaccurate in our judgements. In other words, to err repeatedly is human.

Also known as cognitive biases, these simple errors can occasionally be highly costly. Examples include purchasing a home which we eventually disdain, agreeing to a marriage which brings more pain than pleasure, and coughing up cash for a dream car which turns out to be a nightmare.

How do we rid ourselves of these maladies of the mind?

Comprising 99 mini-chapters – each addressing a unique psychological/behavioral quirk – the highly readable volume uses layman language to explain how cognitive biases which beset all of us. Distilled from the disciplines of social and cognitive psychology, these systematic errors account for the irrational behaviors of human beings in various contexts.

Some of these traits are common knowledge. They include the well-known confirmation bias (interpreting new information to suit existing beliefs), authority bias (deferring to folks like government heads, scientists, economists, and consultants), groupthink, cherry picking, reciprocity, halo effect (where a single attribute overshadows all others), and liking bias (we’re more likely to be convinced by somebody we like).

Others, though less apparent, aren’t any less common.  These have rather novel names and include:

2. Zeigarnik effect – erasing something from memory once its completed in our “to-do” list;

3. Will Rogers Phenomenon – moving an item from one set to another set to raise the averages of both (even though there isn’t any net gain in the system);

5. Déformation professionnelle – the notion that if your tool is a hammer, every problem looks like a nail;

7. Winner’s curse – where we overpay for an item at auctions/markets in a bid to win it;

8. Hedonic treadmill – the tendency for us to bounce back to a stable level of happiness despite major positive or negative life events; and

9. Hyperbolic discounting – where we place greater value on immediate rewards relative to distant ones, even though these may be lower in value.

As many would imagine, gamblers and investors often fall prey to cognitive fallacies. Examples include the it’ll-get-worse-before-it-gets-better fallacy, neglect of probability (why people prefer a lower chance to win a bigger jackpot rather than a higher chance to win a smaller booty), forecast illusion (believing too much in experts), conjunction fallacy (being attracted to harmonious or plausible stories), beginner’s luck and of course the gambler’s fallacy (where one believes in the ‘balancing force of the Universe’).

The most interesting fallacies are those associated with the world of media. Here Dobelli supplies examples like chauffeur knowledge (assuming that news anchors possess true knowledge), story bias (including only elements that make a good story), personification (why human stories are superior to factual reports in convincing people), false causality (associating unrelated events to each other as they appear to correlate), framing (presenting messages to achieve desired perceptions), and outcome bias (making decisions based on results rather than process).

In the book’s epilogue, Dobelli proposes that the only way to avoid cognitive biases is to embrace the practice of via negativa. Here, we’re encouraged to eliminate our downsides and thinking errors so that the upsides will emerge. As anticipating and avoiding fallacies can be costly, one should still make intuitive decisions in areas where one has in-depth knowledge and understanding (ie circle of competence).

Drawing from the collective wisdom of ancient philosophers like Aristotle as well as contemporary savants like Barry Schwartz, Nassim Nicholas Taleb, and Daniel Kahneman, “The Art of Thinking Clearly” capitalizes on the growing popularity of behavioral economics. While it isn’t structured as a self-help guide, its 99 precepts provide a useful reference to anybody hoping to avoid the systematic errors which afflict each and every one of us.