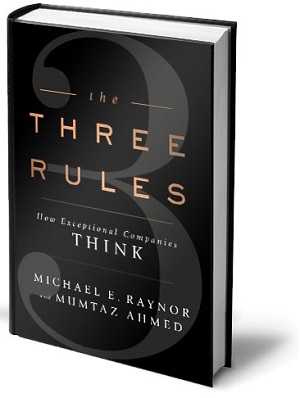 Many business books take the route of dispensing advice in the form of to-do lists. You know the kind – How to hire the best team. Check. Leadership principles 101. Check. Ten ways to improve your marketing strategy. Check.

It’s great for those who are looking for advice that’s simple to follow. But oftentimes the knowledge avalanche is overwhelming – 100 points to follow, for example. What’s infinitely worse is that far too much advice bandied around in business book circles can be mostly anecdotal, unbacked by proper research and data to substantiate the advice given.

Not quite so with “The Three Rules – How Exceptional Companies Think“, written by Michael E. Raynor and Mumtaz Ahmed. Coauthors Raynor and Ahmed, along with a team of researchers at Deloitte, looked at over 25,000 companies from hundreds of industries covering a period of 45 years to uncover 344 companies they believe to qualify as statistically ‘exceptional’. It took them five years, but they discovered a salient point in their research on these companies that may just overturn the way you think about business – that it’s how exceptional companies think, and not what they do or how they act, that really determines their success.

More importantly though, Raynor and Ahmed uncovered three very simple rules that differentiated the best from the rest: 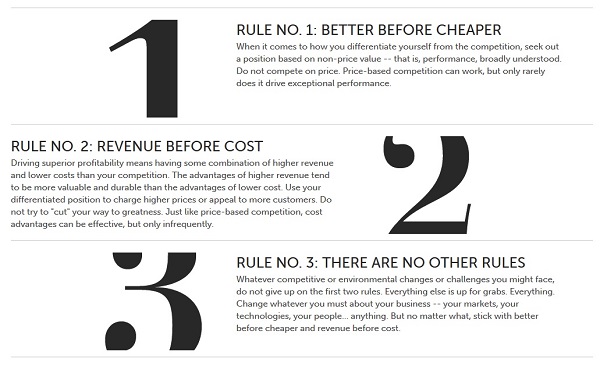 Many other business commentators have stated this maxim before (in various other ways as well), but the idea is simple: find a position that’s based on non-price value i.e. do not compete on price. Although price-based competition can work, but only rarely does it lead to exceptional performance, Raynor and Ahmed write.

You know the trend of cutting costs to boost profitability? Well, that seldom leads a company to being exceptional. Instead, the focus should be on driving superior profitability through a combination of higher revenue and lower costs than your competition. The advantages of higher revenue tend to be more valuable than the advantages of lower cost. “Use your differentiated position to charge higher prices or appeal to more customers. Do not try to ‘cut’ your way to greatness. Just like price-based competition, cost advantages can be effective, but only infrequently,” they write.

3. There are no other rules.

It sounds almost like a disclaimer, but the point here is that a company must understand that there are no other rules aside the two mentioned before. “Whatever competitive or environmental changes or challenges you might face, do not give up on the first two rules. Everything else is up for grabs. Everything. Change whatever you must about your business – your markets, your technologies, your people… anything. But no matter what, stick with better before cheaper and revenue before cost,” they claim.

The chapters highlighting these three rules are backed by plenty of examples – Raynor and Ahmed picks out 27 companies (in sets of three from nine different industries), classifying each as either a ‘Miracle Worker’, ‘Long Runner’ or ‘Average Joe’ by dissecting their performances  using quantile regression to determine their ROA (return on assets) across many years. It’s a lot of numbers (in fact easily a quarter of the book comprise of charts and appendices), but suffice to say Raynor and Ahmed show empirical proof, coupled with explanations of a company’s ebb and flow in fortunes as why each grew or floundered as they followed or ignored the three rules.

But if there’s anything really daunting about the book, it’s the sheer amount of data that threatens to overwhelm. It’ll take you a while to get through “The Three Rules“, but the promise at the end is that you can create and drive a company towards exceptional performance as long as you persistently follow the three rules offered by Raynor and Ahmed. 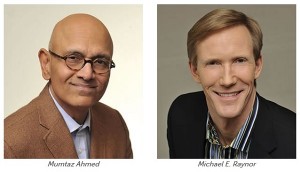 How exactly to follow these three rules, though, is altogether another question. Or maybe the seed of a follow-up book from Raynor and Ahmed.

Maybe in the form of a 100-point checklist.