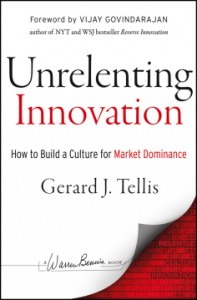 Innovation – that strangely elusive quality that most businesses would kill for, but many struggle to attain or maintain. There’s plenty already written on the topic – for example, how animation company Pixar approaches innovation in “Innovate The Pixar Way” – but “Unrelenting Innovation: How to Build a Culture for Market Dominance” by Gerard J. Tellis is still likely to offer fresh new insight for those who’re involved in building innovative organizations.

As it turns out, innovation is not so much systems and processes as it is about building a risk-taking culture, according to Tellis, a professor of marketing, management and organization as well as the director of the Center for Global Innovation at the University of Southern California Marshall School of Business. In fact he argues that one of the main ways to remain on the cutting edge of innovation is doing the one thing that most companies fear to do – cannibalize successful products. That’s right, slaughter the cash cow, in order to bring in the new.

Tellis names example after example, one case study after another, as well as provide in-depth research (based on a study of 770 companies across 15 countries, the origin of 90 radical innovations spanning over 100 years, and the evolution of 66 markets spanning over a 100 years) that highlights exactly how risk-taking – and rewarding risk – is intricately linked with innovation.

There are many positive examples: Google, on allowing employees to dabble 20% of their work time on personal projects, amongst others like 3M, IBM and Toyota. Even Samsung, normally accused of ripping ideas of market leaders, surprisingly gets a thumbs up for embracing risk by backing different technologies (in case one supersedes the rest). Negative examples likewise litter the field; General Motors, Eastman Kodak, Research In Motion and Microsoft – who blinded itself to the opportunity to profit from search advertising long before Google did – are some of the more telling ones.

Of course, it’s easy to simply name examples, but what are the lessons that one can learn to apply in our own situations? Here “Unrelenting Innovation” takes apart those organizations with winning cultures and explores the theory and evidence for each of the different components of culture that lead to innovation. Tellis also covers various micro-theories around innovation – the Wall Street effect, the size effect, disruptive technology effect, and the S-curve effect – as well as macro ones; but it ultimately concludes that culture is superior to alternate theories for fostering innovation.

If you’re a student of innovation, I guarantee you your copy “Unrelenting Innovation” will be one of your most-thumbed books.