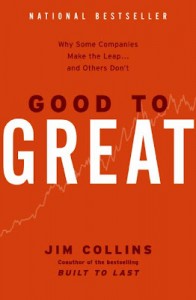 Are charismatic superstar CEOs the answer to enduring success? What about dramatic mergers and acquisitions – aren’t those the panacea to ailing companies? Finally, cutting edge technologies ought to at least have an impact on greatness, right?

Surprisingly (or perhaps unsurprisingly), the answer to these are “NO”. Not at least according to “Good to Great: Why Some Companies Make the Leap… and Others Don’t“, a phenomenal business bestseller published in 2001 by renowned business author Jim Collins.

The fruit of an exhaustive study tracking the performance of Fortune 500 companies over a 30 year period, the book recorded that “good to great” companies had an average of 15 “good” years followed by 15 “great” years. During the latter years, their market valuations leapfrogged their industries by at least three times.

According to “Good to Great“, the key ingredients behind enduring “greatness” stem from six key disciplines divided into three categories. These characteristics were common to these 11 firms, and they are:

a) Good-to-great companies are usually led by highly driven “Level 5” Leaders who embody a paradoxical mix of personal humility and professional will, focused on producing sustained results and displaying a workmanlike diligence – more plow horse than show horse.

b) Good-to-great companies began their transformations by getting the right people on the bus (and the wrong people off the bus) before figuring out what strategies to employ. The is embodied in the statement “First Who, Then What”. Contrast this with comparison companies that employ the “genius with a thousand helpers” model where discipline is imposed only by the sheer will, charisma and force of a “superstar” CEO.

a) Good-to-great companies Confront the Brutal Facts (Yet Never Lose Faith) in what they do. They have cultures whereby people have opportunities to be heard and where, ultimately, the truth is heard. This is epitomized by the Stockdale Paradox where one retains absolute faith that one can prevail to the end despite the difficulties and confront the most brutal facts of one’s current situation.

b) Good-to-great companies adopt the Hedgehog Concept (i.e. focusing on being the best at only a few things at a time). To do so, it is suggested that companies can form a council comprising the leading executive and between 5 to 12 key members of the management. The council should focus on asking the following three questions (which form 3 circles):

1) What you can be the best in the world at;
2) What you are deeply passionate about; and
3) What drives your economic engine. 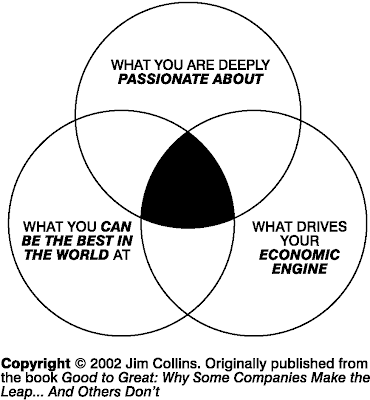 a) Good-to-great companies closely follow a strong Culture of Discipline. They often use words like rigorous, dogged, diligent, precise, fastidious, consistent, accountable and methodical in their corporate lexicon, and are characterized by having a “stop doing” list. A culture of discipline involves getting people to adhere to a consistent system yet have freedom and responsibility within that framework – its about self-motivated people who display extreme diligence and a stunning intensity.

b) Good-to-great companies use Technology as an Accelerator, not a creator of momentum. They do not chase after fads and shiny bright objects, yet become pioneers of carefully selected technologies. The key is that technology must fit into their Hedgehog Concept (three circles) and to respond with thoughtfulness and creativity, driven by a compulsion to turn unrealized potential into results.

Beyond the application of Disciplined People, Disciplined Thought and Disciplined Action, the book also described how good-to-great companies build momentum through continued improvement and the delivery of results in a “Flywheel Effect” as seen below: 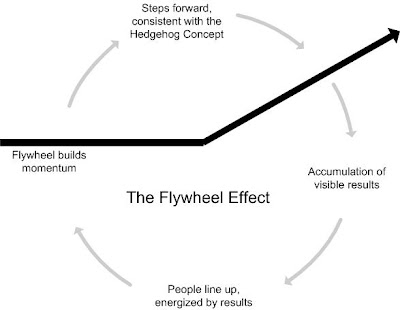 In the final chapter, Collins ties in key ideas in “Good to Great” with “Built to Last” (his earlier bestseller authored with Jerry I. Porras). Key concepts in “Built to Last” such as Clock Building. Not Time Telling, Genius of AND, Core Ideology and Preserve the Core/Stimulate Progress are related to the six concepts highlighted above.

As a caveat, Collins highlighted that not all good-to-great companies will necessarily stay that way. He mentioned that Gillette started faltering in 1998 when its leadership became distracted by non-core projects in the book. More recently, we’ve heard about Fannie Mae’s colossal demise and how the US government had to bail it out. Obviously Collins has an answer to why great companies don’t stay great and this is captured in an article in Businessweek linked to his more recent book “How The Mighty Fall“.

“Good to Great” shows that there is no silver bullet or shortcut to corporate success. Companies that make the cut do things the hard way and are willing to stick-it-out despite what naysayers (or Wall Street) says.  By emphasizing the hiring of good people, building of robust cultures, and implementation of rigorous and disciplined systems, it provides a good road map for companies willing to bite the bullet and do what it takes to succeed in the long term.