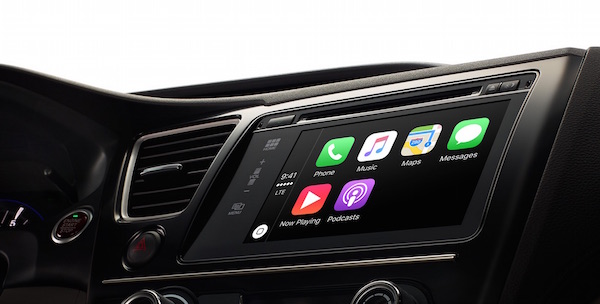 While specialising in different areas of business, tech giants Apple and Google have two things in common. Firstly, they have both moved into areas beyond their core businesses – doing battle over the hotly contested mobile phone market – and secondly they are competing head on for a slice of the car technology market.

Ultimately, they are both looking to develop the driverless car. This is still shrouded in a degree of mystery in the case of Apple although The Guardian has reported some of their activities in research and development in this revolutionary area.

At present, Apple and Google are engaged in providing in-car tech – helping to build the sorts of apps and software that are popular on smartphones into the driving experience – and car makers are either taking up with one or the other company’s solution or are offering cross-platform compatibility.

Apple’s in-car ‘infotainment’ system, CarPlay, is an evolution of its previous in-car connectivity which basically acted as a conduit for people to play music from their iPods and iPhones via the dock connector.

CarPlay uses the more recent connecting method, the Lightning Connector, which was introduced with the iPhone 5 in 2012 and provides far more connection options. Along with music, it is possible to operate phone functions including messaging along with navigation systems.

Apple announced the technology at the Geneva Motor Show in 2014 along with a list of car manufacturers who would be adopting the system. It’s a list that includes an impressive mix of prestige and popular volume makes including Ferrari, Mercedes-Benz, BMW, Ford, Vauxhall, Land Rover, Kia and Nissan amongst others.

Apple’s march into the in-car market is a classic case of a popular product – in this case the iPhone – acting as a gateway to new areas. In the same way, Apple is moving into the hard core business computing market in conjunction with networking heavyweight Cisco on the back of the huge popularity amongst business users of the iPhone smartphone and iPad tablet.

Also in 2014 Google – the established gold standard in internet search – launched its own bid for in-car supremacy with the Open Automotive Alliance (OAA). The OAA’s objective is to bring Google’s mobile platform, Android, to the automotive market and tailor it to suit the demands of the in-car experience.

Microsoft, the GENIVI Alliance and the Connected Car Consortium’s MirrorLink are three more contenders in the in-car technology space, but Google Android and Apple CarPlay are the two platforms tipped to dominate, probably in part thanks to their record of quality beyond the in-car market.

Who will win the day?

It’s unclear which of these two tech heavyweights will ‘win’ if, indeed, either of them does. As said above, some manufacturers are signed up to both platforms, and one theory is that the buyer will choose what platform to go with whether Android or CarPlay.

Another possibility is that in-car systems will basically be set up to default to Android but can accommodate an iPhone when one is connected.

The day could come when people could surf the web via their car’s dashboard screen and learner drivers can refresh a bit of theory mid-lesson – the materials for the test are, after all, already freely available for learners to access whenever they want. It would only be natural if that ‘whenever’ were to include mid drive.