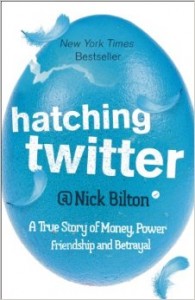 Twitter, which originated as an accidental side project of a failing Internet startup, first launched into prominence in 2007 when it landed best start-up in the blog category of the technology portion of annual festival SxSW that year. That winning announcement would catapult them into the Internet big league – whether the service, or the co-founders behind it, were ready or not. The book “Hatching Twitter: A True Story of Money, Power, Friendship, and Betrayal” explores the tumultuous proceedings before that life-changing award win, as well as the even more turbulent times that followed when Twitter would become the multi-billion dollar business that it is today.

Written by New York Times business and technology journalist Nick Bilton, “Hatching Twitter” – which reads like the exposé you’d expect it to be – is an exercise in exhaustive investigative journalism; it’s painfully and carefully pieced from countless sources, documents and even internal company emails, for possibly the best and most accurate depiction of events that’s happened to the company and its founders even from before its official founding.

Bilton takes us on a comprehensive behind-the-scenes peek that explores Twitter’s beginnings like never before, and the sordid insight here dwarfs even co-founder Biz Stone’s version of events in his book “Things a Little Bird Told Me“. And unlike Stone, as an outsider Bilton is a lot more free to say things as it is; he’s unabashed about pointing out the failures of the individual members that made up Twitter’s early – and current – team: Evan Williams’ ineffectual leadership, the disruptive influence of Noah Glass (the member who had coined the name Twitter but was ultimately kicked out and expunged from the company’s official history), and Jack Dorsey’s brilliance but also tendency to form personal feuds, for example.

You’ll read about all the different personality clashes and divergent cofounder views on the directions for the company, even as the Twitter grew at an explosive pace that’s forced the company into a multitude of different challenges – technical or otherwise. I’d argue that all the drama and backstabbing contained within “Hatching Twitter” is really perfect material for a movie, in the same way Facebook’s founding was as fodder for the 2010 film The Social Network.

“Hatching Twitter” is as much as an exposé on Twitter’s founding as it is a cautionary tale for anyone in the startup scene. When money and hunger for power comes into the picture, friendships – and the fate of the company – will be at stake. It may also give you an idea of why Twitter is languishing in its current state.