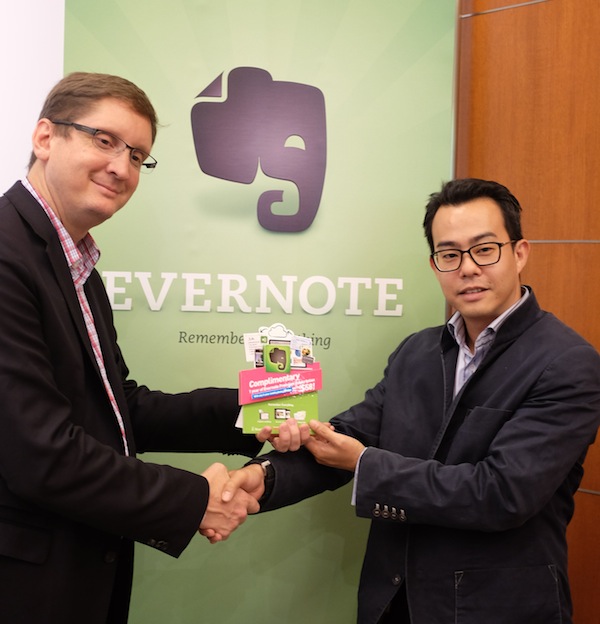 Productivity and notetaking software maker Evernote has been growing from strength to strength since it launched into public beta in 2008, and to date has grown to some 66 million users worldwide. In Southeast Asia that number sits at a modest 2 million; Singapore alone comprises over 400,000 of that number, which is a massive takeup rate for a country with a population of just over 5 million.

“The outlier in Southeast Asia – and the rest of the world – sits right here, in Singapore,” shares Troy Malone, general manager of Evernote in Asia Pacific. “We’ve also seen good traction in Malaysia, Indonesia, Vietnam and Thailand.” But it is in Singapore where Evernote sees the highest per capita use of its service in the world, in a country where the company only recently opened up an office – with just 3 people – to oversee the region.

Yet the company isn’t intending to sit on its laurels, especially with its achievements in Singapore. Today Evernote announced a strategic tie-up with local telecommunications provider StarHub, who will give its new and recontracting post-paid subscribers from today a complimentary one-year Evernote Premium subscription. The offer is valid till 21 August 2014.

These customers also get a special and exclusive value-added feature: Evernote video notes, where users can shoot and upload videos quickly and easily as notes in their notebooks. According to Evernote, this feature was first introduced as part of a partnership with Japan-based telecommunications provider NTT DoCoMo, and is currently not available for regular subscribers.

It is uncertain how many existing StarHub customers already use Evernote – it has a total mobile customer base of around 2.25 million of which around 1.2 million are post-paid customers – or how many of them are likely to upgrade to Evernote Premium. But Ken Gullicksen, Chief Operating Officer of Evernote, who was in town for the announcement, is optimistic that this partnership will garner mutual benefit for both sides. “By giving subscribers the ability to ubiquitously capture, access and discover everything that’s important to them, this partnership will chart the course for evolving mobile experiences for a new generation of consumers in Singapore,” Gullicksen explains. “Southeast Asia is highly important for us, especially with the explosive growth in the online population here that has overtaken the rest of the world.”

Head of i3 StarHub Stephen Lee, believes the integration of best-of-class mobile services and applications from partners such as Evernote is an ideal way forward to give greater value to its customers. “In order to grow our business successfully, we will continue to forge strategic partnerships with market-leading companies, including innovative over-the-top players, which matter to us and our customers.”

Both Evernote and StarHub declined to reveal targeted growth numbers as a result of this collaboration.