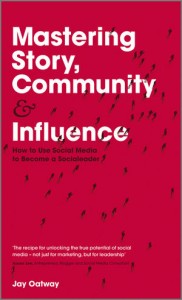 In fact, the author in his book “Mastering Story, Community and Influence: How to Use Social Media to Become a Socialeader” details not only the role of social media plays in modern-day narrative and competitive landscape, but how one can also maximize one’s own digital influence whether in a personal or professional capacity. The book essentially looks at various fundamentals underpinning social media, such as the power of influence and social currency, the importance of a strong story or narrative, as well as the value of an invested community. And those who understand these precepts, and leverage on them well, can be Socialeaders in their own right.

Of course, some of the material in the book can be found in similar tomes such as Jeremy Goldman’s ”Going Social” or “Engagement Marketing” by Gail Goodman. But Oatway also focuses much of the book at a personal, rather than brand, level. That is, he’s looking at how a person can build their own social capital or social currency, and leveraging that on a personal capacity, such as “future-proofing” a career if some HR person happens to look them up on social media. Those who know how to do so, argues Oatway, put themselves at an advantage. After all, that’s exactly what he’s done – Oatway himself built an influential worldwide following of more than 100,000 Twitter users, through sharing in technology-related social currency. And now he’s a sought-after public speaker in the social media space.

So either you’re in social media because your job requires you to or if you’re looking to advance your digital persona for your own advancement – i.e. be a Socialeader – Oatway’s “Mastering Story, Community and Influence” is a recommended read. You can do worse than learn from one who’s been there and done that.