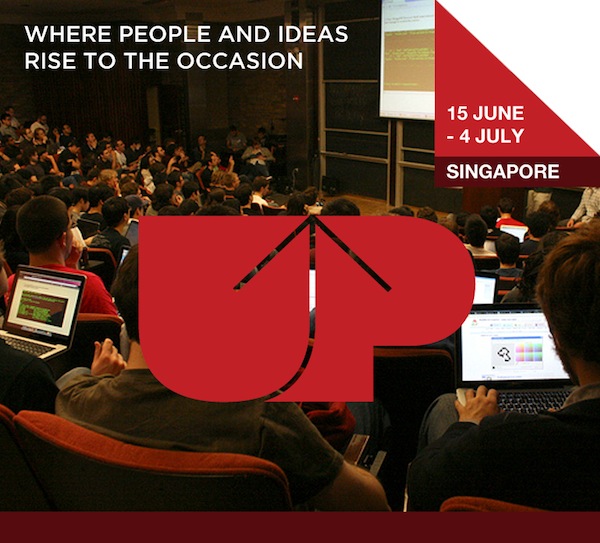 I’m sure we can all agree that Singapore is facing various urban challenges, ranging from a burgeoning population that’s straining the country’s infrastructure to out-of-date public services that could do with an overhaul. But a new initiative aims to help bring some ground-up, citizen-led innovation to help Singapore out of its urban doldrums.

Called UP Singapore (www.upsingapore.com), a first-of-its-kind initiative in Asia – which comprises of various activities – looks to recruit engaged citizens to come together and solve problems by working on open as well as previously unreleased corporate and government data to develop prototype solutions that helps transform Singapore into a more efficient and sustainability city in the future.

UP Singapore, organized by Singapore-based sustainability and innovations company hosting Newton Circus, is comprised of the following components:

People are invited to contribute, participate and take up various challenges that looks to solve problems across five key themes of Education, Tourism, Creative Arts, Community Engagement and Lifestyles of Health and Sustainability (LOHAS).

The city challenges will also form the basis of a speaker series at City Camp on 15-16 June, where director of the City Innovation Group, Christine Outram, will deliver a speech on how citizens, with the help of social media and increasingly cheap technologies, are helping in the creation of liveable and sustainably growing cities.

Outram will be joined by Michael Yap, Deputy CEO of the Media Development Authority and many other influencers at the weekend, which will encourage networking, trend spotting and inspiring discussions focused on delivering regional and global strategies for making cities healthier and more efficient.

22-24 June will see an intense three-day hackathon where 250 of Singapore’s brightest engineers, designers and developers work together on prototyping solutions using data provided by organizations such as SingTel, EZ Link, SMRT, Ministry of Health Holdings and the Land Transport Authority.

You can sign up to participate in the hackathon here.

Shortlisted initiatives from the UP Weekend Hackathon will also be showcased during the World Cities Summit on 1-4 July, and the winning team will also be eligible for up to S$250,000 worth of funding and support from relevant industry experts to fully develop their prototype.

“The demand from citizens for data transparency is a global trend that has provoked a new movement – ground-up urban innovation. In Singapore, we already have an immense amount of open data to play with, it’s just not being fully utilized yet,” says Newton Circus founding partner Jason Aspes.

“We selected Singapore to be the first city in Asia to trial this new way of working because we recognize that it’s one of the most technologically advanced and connected cities in Asia, and it continues to be a global leader around the dialogue for smarter and more livable cities,” Aspes adds.