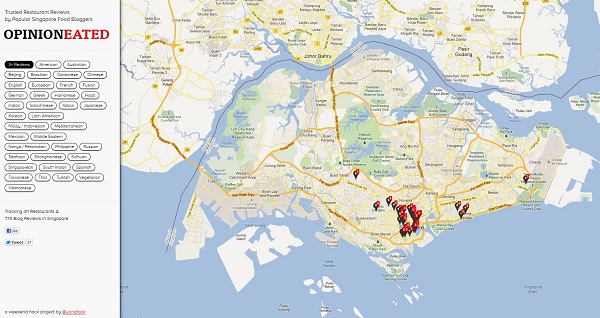 If there’s one thing Singaporeans are passionate about, it’s food – if you speak to a local they’d probably have an opinion about every restaurant and dish in the country. That’s also why the local blogosphere is rife with food bloggers, so it’s not difficult to find reviews on even the latest eating places in town.

That obsession with food had inspired Jon Yongfook Cockle to put together, as a weekend hacking experiment, a website that does a take on content aggregation around food reviews. Yongfook, as he is better known in Singapore’s tech entrepreneurship circle (we first wrote about him in 2009), is an avid cook and the former director for Japan-based online recipe network Cookpad in charge of its international business. Prior to that, Yongfook founded and sold off his own recipe social network Open Source Food. We’d hazard a guess that his affinity with food was what prompted him to develop Opinioneated (www.opinioneated.com).

Opinioneated essentially pulls food reviews from established Singapore bloggers and aggregates them on a map of Singapore. Yongfook shares that he’s been thinking a lot about “local” or “hyperlocal”, and food in Singapore is as local as one can get. “I think there’s still many opportunities in this vertical in South East Asia and it’s one that takes on multiple forms – local shopping, local eating, local jobs,” muses Yongfook. “Building Opinioneated was an experiment to see if I could riff off this local theme and create something of value in a weekend.”

Yongfook says that he’d put together a list of 20 or so food blogs, and then wrote a script that matched their blog posts with restaurant locations in a database. After he compiled the content, he was amazed how two names in the local food blogosphere seemed to dominate the space: ieatishootipost and ladyironchef. “The latter’s links actually make up around 30-percent of the total content on Opinioneated,” exclaims Yongfook. “The man is an eating machine!” There are currently over 400 restaurants and over 700 blog post links in the database.

“(But) I would love to see more Singapore food blogs that mix eating out and cooking in, though. I think that to really understand food you have to know how to work with food – it just makes you appreciate a lot more of the dynamics and dimensions when you go out to eat.” 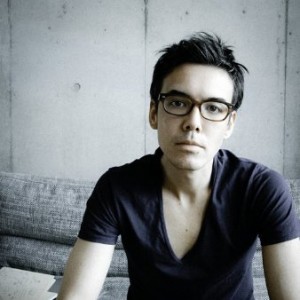 Yongfook admits he’s not intending to grow Opinioneated as a serious business – after all, it was just a fun weekend hacking project. “I thought about adding the ability to write reviews on the site and turn it into a user-generated content site but I’m still sitting on that idea. Hard to monetize in an interesting way other than advertising and then praying that SingTel acquires it too,” says Yongfook, referring to the recent purchase of food review site Hungrygowhere by the regional telecommunications giant.

Instead he’s looking to launch a series of products focused on the idea of “local”, yet with a regional focus. “There’s still tons of opportunities to either build a better mousetrap or to innovate and introduce some new business model etc to a fresh market,” he explains. “The first is Tinytrunk.com which is an e-commerce platform for local shops. The second was Opinioneated.”

“The third is a secret, but it addresses a huge market with only one major incumbent.”

“I’m going to observe, iterate and see what happens. It’s easy and cheap for me to experiment since I’m a Rails developer myself – so I don’t need to put all my eggs in one basket. Observing the data from (the three products) I think I should get a good idea of which one is worth taking to the next level,” he concludes.