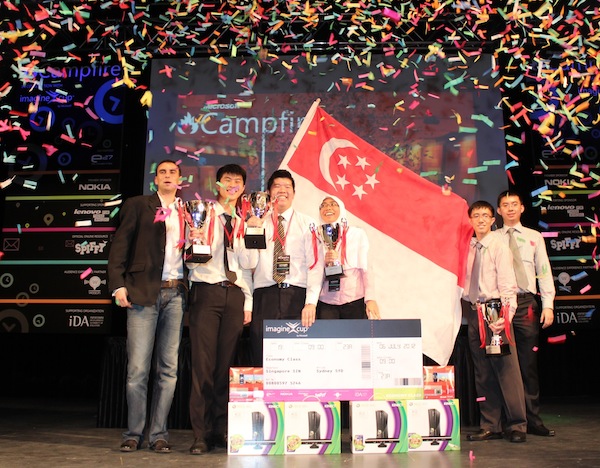 (Team AlphaWaves from Singapore, who will represent the country in the Microsoft Imagine Cup 2012 worldwide finals in Sydney this July)

In a global battle of smarts, only the toughest survive. For over 350 students from 75 countries around the world participating in the upcoming worldwide finals of the Microsoft Imagine Cup in Sydney, things will certainly be tough – they will be pitted against each other with their ideas around technology innovation and entrepreneurship.

“During the past decade, students have taken the lead in adopting new technologies and championing social transformation,” says Moorthy Uppaluri, general manager of Academic Programs at Microsoft. “Ten years ago, we created Imagine Cup with the idea that students can change the world — and every year they continue to demonstrate their passion and creativity in creating technology that makes the world a better place.”

Microsoft Imagine Cup certainly has grown over the years, inspiring an entire generation of technology-savvy youths – with 1.65 million students from 190 countries participating in the competition during the past decade. Starting from some 1,000 registrants from 25 countries in 2003, the competition has spawned many a young technology entrepreneur. For example, Tu Nguyen, from the University of Nebraska at Omaha, won first prize in the inaugural 2003 competition with a Pocket PC application designed to bridge the language gap between English-speaking waiters and Vietnamese-speaking chefs. Nguyen was recognized in 2006 by the Midlands Business Journal as one of Omaha’s top 40 executives under 40 years of age, and is now chief technology officer of DocLanding, an online document management provider.

The first year of grant recipients were announced in January, including team Lifelens  from the United States, which developed a Windows Phone application that can detect the presence of malaria through a blood sample. The team is using the financial and in-kind support from the grant to develop its technology into a platform that uses Windows 8-based tablets and addresses other pathological diseases in addition to malaria.