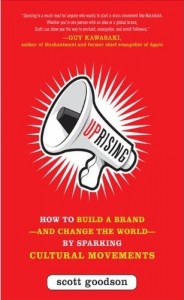 In a “hyperconnected, ultra-competitive, and supercluttered marketplace”, doing more of the same big idea advertising on mostly mainstream media channels isn’t going to work anymore. Consumers are getting jaded and overloaded with information – much of which has little or no relevance to their lives nor their interests.

To win over increasingly cynical consumers who expects nothing less than total transparency (fueled by the openness of the social web), what should companies and businesses do?

Written in a highly persuasive prose, Scott Goodson’s book “Uprising: How to Build a Brand – and Change the World – By Sparking Cultural Movements” argues that the future of business is seeded in revolutions both big and small. From the Arab Spring, Occupy Wall Street, hand-crafted bamboo bikes to Pepsi’s “Refresh” Project, Goodson explains that citizens and companies alike are leveraging on the ease of starting any movement big or small through a mix of online social networks and offline gatherings. 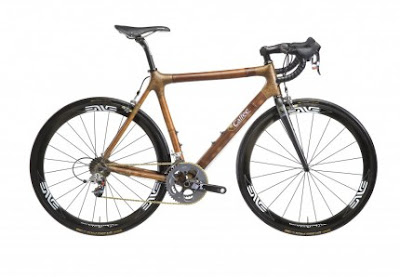 Hand-crafted bamboo bicycles are a movement both literal and figurative! (source of image)

With this fundamental shift, businesses need to change their entire marketing model. Instead of persuading individuals to buy products or services, they should understand what consumers truly care about and find ways to align themselves in a meaningful (as opposed to a pretentious) manner. This could take place via the five phases of movement marketing:

1. Strategy – Developing a strategy for movement marketing by understanding the insights and motivations behind them.

2. Declare – Having a platform to declare the movement, manifest it both internally within the company and externally with its stakeholders.

3. Unite – Finding a way to unite the provocateurs, launch the movement, test it and adapt it along the way.

5. Sustain – Maintaining the momentum, continually providing content (either from within or preferably crowdsourced from supporters) and measuring its success. 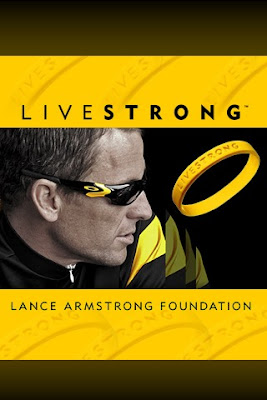 With numerous examples and case studies from the worlds of charity (Charity:Water), politics (No Labels by Mark McKinnon), health and sports (LIVESTRONG by Nike and Lance Armstrong), craft (Handmade Nation’s Faythe Levine), and organizations themselves (“Rise” by the Mahindra Group), the book highlights how “ideas on the rise” can be tapped on to start a marketing movement.

Instead of asking “how can we get more people to buy this product? What is the unique selling proposition of this new service?”, companies should instead find out what’s going on in the world, what people care about, and what’s culturally relevant. By keeping their ear on the ground and taking a stand on a cause that their consumers are fired about, companies can better ride the wave of uprisings while being seen to contribute to their communities.

To ensure that companies are not seen as exploitative, Goodson suggests that they should look deep within the DNA of their organisations and spark the change from an inside-out manner. They should leverage on their expertise and knowledge to share useful information to their followers, create platforms to connect them, provide useful content in an ongoing (as opposed to short burst) manner, equip stakeholders with tools that they can use, and create events that rally the community and generate enthusiasm.

From his company StrawberryFrog, Goodson proposes that effective communication of a movement idea should take place through the following practical steps:

– Align with a powerful idea on the rise to define a culture.
– Create content/actions/tools/events/communities to draw people to this idea.
– Start in places where conversations are already happening.
– Recruit your most outspoken advocates.
– Use mass communications to amplify to a wider audience.
– Curate the idea by suring search engine optimisation.
– Activate word of mouth with PR, social media, and content placement.
– Invent ownable media in online and offline channels to continue the conversation. Movement “swags” like flags, banners, T-shirts, wristbands and the like are useful examples of these.
– Use direct marketing and promotions to encourage purchase.

Rooted in passion, deep-seated emotion and a propensity for righteous (or otherwise) action, movements will increasingly be a way of life for many. To ride this new wave, companies should examine how their missions and visions can achieve synergy with the greater good of society. While newer companies like Zappos.com and TOMS are exemplars of this new sensibility, older companies such as Coke (“Live Positively”), Unilever (Dove’s “Campaign for Real Beauty”) and Levi’s (“Go Forth”) are also embracing the new movement towards movement.

However, it isn’t always a bed of roses. Swallowing the “movement” pill requires companies to be a lot more open, transparent and responsive to their stakeholders. Anything which reeks of insincerity or superficiality will result in scathing backlash. To play in this new arena of marketing, companies must be prepared to say they’re sorry, correct any missteps quickly and take affirmative actions to regain the trust of the public.