If you’re anything like me, I get really annoyed by the stacks upon stacks of bills I receive every month – not only is it a painful reminder of how much hard-earned money is being sucked from me, but also because it’s really, really difficult to keep track of one’s finances this way.

Not to mention, it’s a massive waste of paper. That’s also how Anand Singh and Harveen Narulla felt, and that is why they founded GreenBills Pte Ltd, the technology start-up behind e-bill aggregation solution GreenPost. Officially launched two years ago on World Environment Day, GreenPost aims to make paperless billing a norm in Singapore and in the region, and thus helping preserve the world’s forests for the next generation.

But despite various punitive attempts by different players in the industry to introduce paperless billing, it hasn’t really taken off. “There had to be a scalable and smarter way for people to handle and pay their bills, especially helping them to stop their paper bills, says co-founder Narulla. “We knew that for GreenPost to be successful, it needed to deliver convenience to people and businesses that was far beyond their current billing experiences.”

Singh and Narulla believe they have found the answer, and that is: aggregated e-billing. The idea is ingeniously simple – if consumers can get a single online service in which to view and manage their monthly bills, wouldn’t they be encouraged to drop paper billing altogether? And not only to help save the environment, but really because it’s just a far faster and more efficient way of managing your bills.

The co-founders initially started the company in 2005, incubating at the National University of Singapore (NUS) – the university provided some funding as well – while it did a pilot with local telecommunications provider StarHub that lasted two years. While the team experienced technical success with the pilot, it proved commercially unviable at that time. They went back to the drawing board, and by 2009 found a far better solution that extracted existing billing infrastructure without compromising access by billers to consumers.

It launched a beta in September 2009, which was successfully completed in February 2010. GreenPost launched commercially the following month, and secured its first client in April 2010. Today, the service has over 15,000 users, who can access 9 major billers from the region such as SingTel, StarHub, M1, Singapore Power, Maxis, TNB, Digi, Optus, and NUSS, with more being added constantly. 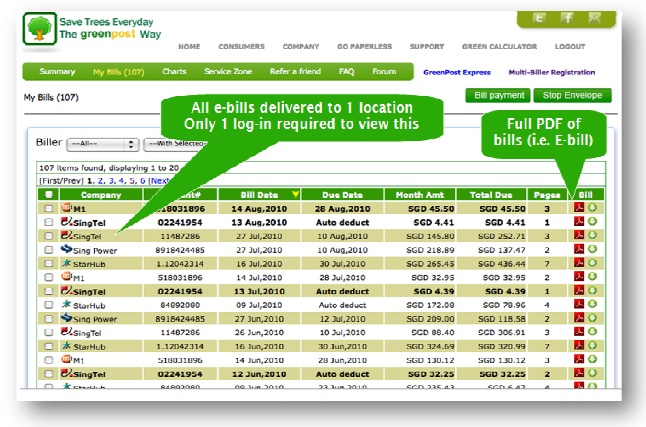 “There are no comprehensive aggregators of electronic documents (including e-bills) in Asia – and that’s the gap that GreenPost fills,” says Narulla, who was previously an attorney. “We think this is a greenfield market that presents enormous growth potential.” They recently launched its service on the iOS and Android mobile platforms, believing – correctly – that consumers will embrace mobile billing.

GreenPost has big ambitions in Asia and the Pacific. It has just signed an MOU with an Australian public listed group which wants to take its system into Australia and New Zealand. Other licensing discussions are also afoot.

But the founders admit they’ve been extremely fortunate to ride the trends which has helped them get to this place. “The future of billing lies within the cloud, and we were fortunate enough to spot this trend when we first started,” explains Narulla. “The main challenge we face now is revolutionizing the approach to paperless billing and changing users’ perceptions.”

“Luckily the world is changing fast,” he says, adding that the increasing concern over the environment also made it an opportune time for service providers who offer green technologies such as digital billing.

Narulla says Singapore is one of the most convenient places to start and run a company, as the country is steeped in best practice. “That being said, it is challenging to start innovative technology businesses in Singapore. Most of the ideas that are recognized here are “me too” concepts that have been already tested elsewhere,” he says ruefully.

When it comes to market size and available funding, Narulla says there’s both pros and cons. “We realised that the funding community is not very B2C concept friendly and more comfortable with expansion funding, rather than a new B2C/B2B business,” shares Narulla. “We faced problems in getting like-minded funding to reach up to a critical mass. Luckily, we got relevant investors after some effort, and were able to launch our product.”

Thankfully, says Narulla, they’ve not faced the problem of a scarcity of good talent as experienced by many of the other startups in Singapore.

“We are meeting our milestones,” he shares. “Our users are saving a huge amount of time and have no stress with bills anymore. But we are always listening to users for product innovation changes and are planning payment innovation now.”