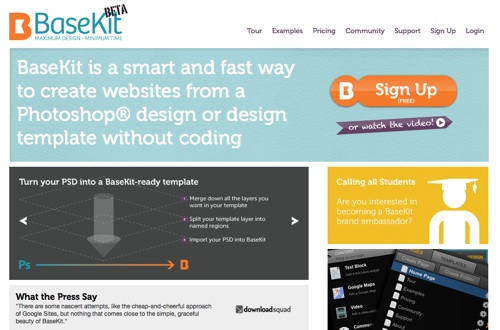 BaseKit is a new online platform for creating websites from a Photoshop design without coding. Launched earlier this month in the US and UK following US$2.6 million cash injection from Eden Ventures and UK’s National Endowment for Science, Technology and the Arts (NESTA), BaseKit allows web design professionals to easily produce and publish websites without writing any HTML code.

After all, there is really one standard way to design websites – Photoshop, used for 90-percent of small business websites – but no standard for production and publishing. Designers would try to code in HTML themselves, or outsource that. BaseKit solves this problem by developing a platform that is easy to use and can quickly turn a website design into a fully functioning site online. BaseKit’s technology was developed in 2008 by a bunch of web designers who realised that the technical design of websites could be improved if design and coding processes were integrated and streamlined. Simon Best, Richard Best and Richard Healy, who have their own web design and development companies, decided that reducing iterative development tasks through a common, fully hosted framework lets designers create and manage websites faster.

“Right now it is a complete mess to go from a Photoshop design to a live website,” said Juan Lobato, who invested in BaseKit when the Seedcamp winner raised its initial round of seed funding in April 2009, and became its CEO June this year. “Web designers waste hours coding or spend money hiring someone else to do the job for them. There is no reason to do things this way when you use BaseKit and we see it as a huge market opportunity.”

Following its successful private beta, BaseKit has more than 20,000 registered users. “We are very early-stage and think we have a huge opportunity. Right now, we’re really focused on building a big business. We’re not building the company to get bought, we are building it around a problem that we see in the market that we think we can address,” says Lobato.

Starting-up tech companies in Europe is ‘challenging as the right ecosystem is not yet established enough’, says Lobato, who had stints with Telefonica Group in Spain and McKinsey & Company in London. After that he ran and built BEAM.TV (later sold to Carlyle), and then co-founded London-based Ebury Partners. “However, London is becoming a hub for people that want to try entrepreneurship in Europe and you do find the talent and the capital resources. In addition, more and more European London based companies are seriously looking to build their networks in the US and we are benefiting from that too.”

“I think now is a better time to start-up tech companies in Europe than 10 years ago and I am sure that in the next five years we will see more talented Europeans choosing entrepreneurship as career path.” Lobato says he personally chose an entrepreneurship path because ‘I want to have high impact on whatever I do’.

“Start-ups can be amazing organisations these days where you can be solving a complex problem and selling to the world with very small and committed teams.”