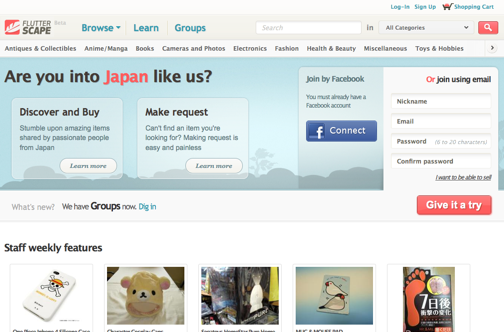 Don’t we all love wild and wacky Japanese products? You know you do. Some of the bizarre products that come out from the Land of the Rising Sun are also extremely popular with non-Japanese – yet can be very inaccessible. Cue in Tokyo-based FlutterScape.com, a cross-border and cross-cultural social e-commerce platform that aims to make buying Japanese products easy and accessible.

Basically, FlutterScape lets users shop for Japanese products without day-to-day hassle of worrying about payment fraud, international shipment, and non-native language customer support and post-purchase care. “(We) give people the power to share their product discoveries, while making it easy to sell and buy products through our safe international payment and logistic systems,” says FlutterScape founder and CEO, Takehiro Kakiyama.

“I came up with an idea of FlutterScape when I visited Boston in October 2008. While grocery shopping at K-mart, I found many interesting goodies that I have never seen in Japan before,” he says, adding that those products would have make his friends or family back home very happy. “(It) dawned on me that travelers or foreign exchange students naturally know what could be hot and popular back in their home country, not locals.” He asked some of his friends who were non-locals and they listed an entire slew of unique products that people can’t get anywhere but in Japan.

They suggested this Kenko Hokkairo handwarmer (left), for example. It keeps your hands warm when you rub it between them.

Takehiro then realized it would be interesting if he and his friends can share such interesting products to other countries through a website with proper language support, and help customers abroad get unique products from Japan.

Japan For The World, By The World

Interestingly, the FlutterScape team is made up of four people of different nationalities – aside from Kakiyama, who’s Japanese, there’s co-founder and CTO Ari Awan, who is Indonesian, Filipino Homer Yulo, and Dutchman Dominiek ter Heide. Despite their differences in backgrounds, all confess to love Japan.

Takehiro, who graduated from Tokyo’s Sophia University earlier in March this year with a major in international business and economics, had always wanted to become ‘a prominent banker’. One day, he chanced upon a documentary program about online microlending community Kiva.org that inspired him so much he decided to be an entrepreneur ‘to make this world a better place’ instead.

When Takehiro was introduced by some colleagues to Ari Arawan for the first time, the two clicked so well that Takehiro shared his business plan to Ari. Ari, who was finishing up a masters degree at University of Tokyo and had already lined up a job at a financial services company, decided to join Takehiro on starting FlutterScape. Later, they pulled in creative director Homer Yulo, who used to work on a social language learning engine site, as well as Dominiek, founder of blink.ly and previously the CTO of smart.fm, to serve as an advisor.

“Ari and I hassled to gather foreign friends from our universities as our alpha testers, and that’s how we started!”

“We are currently targeting collectors from all over the world in pursuit to help them find and obtain goodies from Japan.” Although its primary focus is Japan, Takehiro has not ruled out expanding to products from other countries. FlutterScape‘s revenue model revolves around marginal fees charged for customer-to-customer (C2C) transactions, as well as other potential revenue sources such as business-to-consumer (B2C) charges, selling of survey research data as well as online advertising.

To Takehiro, entrepreneurship is like a self-mentoring, life-time process to become a better human being. By making ‘good’ mistakes, he says, one can progress to ‘the next stage’.

There was a time when he decided to consume as many books as he can – inspired by a painful breakup with a girlfriend – where he came across this saying: “In order to accomplish your goal, you need to make three times as much effort as your competitors”. That made him realize time was short, and he determined to make the best of available time, even waking up at 5am in the morning and going to bed around 2am in the morning, so as to make the best use of the day for pursuing his goals.

According to Takehiro, the Japanese startup scene is constantly booming but few outside Japan hear of Japanese innovation is because most Japanese startups are too inward-looking. For one, they believe that there is enough domestic consumption to make a business out of; another is the language barrier.

He also says that it’s difficult to start web-based businesses in Japan because of the lack of the right talent. “Speaking from experience, starting an Internet-based startup especially requires a lot of effort for people like me who are not programmers, since not so many people can code and even if you find programmers, they already work for other companies.” Even if the talent issue is solved, there is a bigger, cultural problem. “It is hard to borrow money from family or parents who are from baby-boomer generation after World War II. (They) are quite conservative thinking,” Takehiro explains. “Raising startup capital from angel investors? Finding angels here is also quite tough unless you have a kick-ass idea, and (great) networking and pitching skills.”

Funding is one of the reasons Takehiro decided to bring FlutterScape to Echelon 2010, the web technology event that took place in Singapore earlier in June. Takehiro reveals that he and Ari had fruitful, spontaneous encounters with angel investors two days in a row at the event. “I am in the midst of talking to Singapore-based angel investors, as well as ones from Silicon Valley, and finalizing our seed funding stage,” he says. Rumor has it that they’ve managed to score funding from a Singapore-based media company.

“Echelon 2010 was an amazing event. I met many inspiring entrepreneurs from all over the world, who introduced their startups with a twinkle in their eyes,” remembers Takehiro. “They obviously love what they do.”

And from the twinkle in his eyes, it’s also abundantly clear Takehiro is loving what he does.