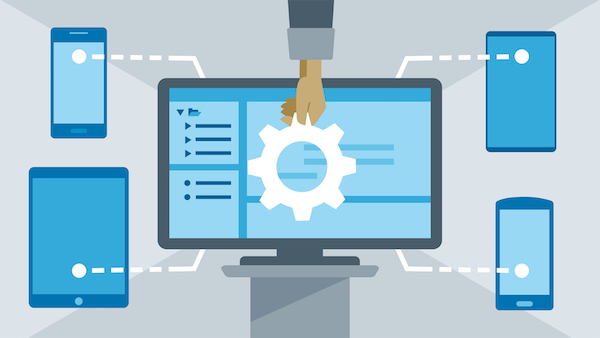 The cost of a mobile app depends on a variety of factors such as functionality, design, supported platforms, targeted audience, integration points etc.

There isn’t a single software project where price doesn’t matter. Even when the customer has money to burn, they would rather get more for the same price.

In this article, Belitsoft experts have gathered 6 useful ways to optimize spending on your next mobile app project.

There are two main paths to follow in mobile app development: native and cross-platform.

While a truly native app can allow you to get the most out of the platform it targets, it has little to do with the idea of saving. Code written for one OS cannot be reused for another, which makes the development and maintenance of native mobile apps expensive and time-sapping.

The story is different for cross-platform. Our React Native developers note that it takes at least 30% off the total development sum as compared to native apps. The final figure depends on the number and complexity of platform-specific features.

How is it possible?

With React Native, one can develop one common codebase for both Android and iOS, which makes around 90% of the app. If you have a website written with React, the team can adopt this code too. Moreover, as both React and React Native are based on Javascript, you need to hire only one team of Javascript developers.

Much of the shared code allows to update and fix bugs only once, while the changes are synced across all devices and platforms. Unit tests also have to be written once and can be applied to both platforms, which reduces time and resources for apps’ maintenance.

The most beautiful part of React Native, however, is that its apps perform almost identically to native.

Alexander Grigoryan, the senior director for software engineering, application platform and online grocery for Walmart Global eCommerce, tells that his team looked at various options for building its cross-platform apps.

“Solutions in the open source world similar to what we accomplished are ‘PhoneGap’ or ‘Cordova.’ Going down this route led to a noticeable difference in performance compared to other parts of our native app,” he told me. “This was validated when we re-wrote those parts in React Native or mobile app technologies and saw metrics which showcased more engagement from our customers.” The team also looked at Microsoft’s Xamarin tools, but decided that it wouldn’t give it benefits like reusable UI components, shared JavaScript modules and over-the-air updates as React Native. “Our front-end for web is also React, so it all just made sense for us to invest in React Native as the solution,” said Grigoryan.

Open source projects are used by companies all over the globe to save time and money. Businesses can borrow these code pieces from the resources such as Github or StackOverflow and use them for some of the UI features. This open source code offers a ready-made structure that can be customized as per your requirements.

There are also numerous third-party SaaS (Software as a Service) vendors that provide ready-made solutions instead of those custom-built for a monthly fee. This subscription-based model allows to reduce upfront costs. Moreover,  a provided solution may be scaled and tailored for your specific requirements.

Any of these tools can speed up and ease the development, which results in a lower total cost of ownership.

It may be alluring to choose a fixed price scheme and know how much you should pay for a project right from the start. However, in most cases, the development team will hesitate before giving you an accurate quote for the project.

The reason is there are no identical apps and even a minor change can dramatically alter the course of development. It makes a company add some hours for Change Requests and up to 20-30% to the potential cost for the sake of risk avoidance.

If you are really looking for an option to save money, use a Time and Material model in combination with agile methodology and ask your project manager for weekly progress reports. This way you get an app which you have actually paid for.

Time and Material gives a customer more flexibility in tracking the app state and adjusting expenditures. Moreover, you can freely ask for changes or additional functionality without filing a change request. This scheme is particularly effective when there is no clear vision of the project’s outcome, which is typical for medium and large-scale projects.

“A Minimum Viable Product is that version of a new product which allows a team to collect the maximum amount of validated learning about customers with the least effort,” Eric Ries, “The Lean Startup” author, says.

MVP (a Minimum Viable Product) is a working prototype of a mobile app with all the core functionalities to satisfy the initial users and gather feedback. It allows businesses to test the viability of a product with less financial risks and adjust further development to the users’ demands.

When an app has progressed beyond the MVP stage it is time to think about code refactoring.

In short, refactoring means refining the code to make it more understandable and lucid and has nothing to do with low-quality or deficiency. Unclear project requirements, time limits and different coding styles are the typical culprits for the muddle.

The larger an app gets, the more elaborate the code becomes and the more team members are needed to handle it. Subsequently, the developers will need more time to sort this code through as well as implement new functionality. If you don’t like the sound of paying additional sums for it, refactoring will mitigate the risks.

“Refactoring is similar to brushing teeth. It is a prophylactic work that should be ongoing if you want to avoid the exorbitant costs when the emergency happens,” Dmitry Garbar, Senior Project Manager at Belitsoft, says.

However, if your MVP will not scale any further, spending money on refactoring will not make sense.

This doesn’t mean that you can make a functional team out of rookies only, but having one or two new guys will be good for your bottom line.

Not every software job is complex enough to have the top developer do it. Some tasks, like making sign-in forms, can be handled by the juniors just fine. Their hourly rate is at least twice as low as their senior counterpart’s, which makes hiring them worthwhile.

Cross-platform development, open-source tools, Time and material pricing, MVP and code refactoring are the 5 most common and effective strategies for someone looking to cut app development costs without losing its quality.

However, given the unique nature of each product, a reputable service provider may suggest other tailored workarounds to make the digits even more appealing.