by Sally Poblet, CEO of Wellthie

The theme for Women’s History Month 2018, “Nevertheless She Persisted:” is a leitmotif that I believe touches every woman, especially women in the still male-dominated world of business.  It is due to dogged tenacity by generations of persistent women that the future is bright for business women in the 21st century; generations of women who shaped my journey as an entrepreneur in the present, and who inspire my dreams for the future.

I was born and raised some 8,500 miles away from the bright lights of Time Square, in the Philippines.  I was named after my grandmother Salud, a Spanish word that means, “good health.” Good health seems to have been her only advantage in life.  Salud was orphaned at age six and never finished high school. To survive, she worked as a maid making the princely sum of one dollar per day. She dreamt of a better life and woke up each dawn, driven to work hard and save every peso in order to eventually build her own rice milling business.   She was an entrepreneur and a working mom with seven children. Through the money earned from her business, she was able to pay for her kids’ college and graduate school educations, education that she never received.

I remember eating dinner with my grandmother and being harshly reprimanded when I left grains of rice uneaten on my plate.  She said, “Every minuscule grain of rice is the product of my blood, sweat and tears, don’t ever waste it.” Growing up, I ate the rice from my grandmother’s mill. In doing so, I was being fed the lessons from her drive, hard work, grit and determination to build a business and a family when she was dealt the harshest of circumstances with no parents, no education, no money.  These seeds were the beginning of my journey as an entrepreneur.

When I was three years old, our house burned down from a terrible gas explosion.  At the time, I was helping my mom bake a cake when our gas stove exploded. Thankfully, my mom and I only suffered third degree burns on both legs and arms, but sadly my grandfather succumbed from complications of the burns.  I don’t have memories of the accident itself, but I vividly remember being made fun of in school because my legs were scarred. I cried the first time kids pointed and laughed at me. When I got home, my mother taught me to tell those kids “I can walk, run, and dance like everybody else.” The scars are still on my legs and every day I am reminded of two things: I survived that fire and that I am different, but no less than anyone else. I would persist.

My mother was a fierce single mother who worked full-time while attending graduate school at night.  To earn extra money, my mother always had a side hustle selling all sorts of things from Tupperware to underwear and as her sidekick, selling became my after-school activity.  My mother also taught me the value of education. She believed so much that if I could go to school in the United States, I would have a brighter future than our family before me.  So, I did just that.

I immigrated to the United States as a teenager, leaving my friends and my familiar, albeit humble, beginnings to start a new life.  Again, I stuck out like a sore thumb. At first, I wore all the wrong clothes and had an awkward way of speaking to my new American classmates.  Yet, even as an outsider trying to find my way in a whole new world, I worked hard to graduate at the top of my class in college and went on to an ivy league business school.  I was given an incredible opportunity that none of my family before me had, and I dared not waste it.

My grandmother and mother were both breadwinners.  They tirelessly hustled, working day and night, they made the most of whatever talents they had, and overcame whatever obstacles were in their way through sheer grit and unstoppable persistence.  As a young girl, that was all I knew.

Then it was my turn.

My first job out of college was managing my family’s home healthcare business at the advanced age of twenty-one.  I faced the pressure and sobering responsibility of making payroll for employees who had families and who were over twice my age.  I knew those people were depending on me, like my grandmother once depended on her employers.

Later, I worked at several other health care startups where my role was limited only by how fast I could learn, so I learned quickly.  I was not always met with success. There were layoffs and failures, but undeterred I kept on moving forward.

With my ambition to understand how health care is paid for, I joined one of the largest insurance companies in the country.  I spent eight years building everything I could. I built insurance products for millions of people, I built my expertise, I built my network, and I built on my passion for the people the healthcare system serves.  It was a great job. I loved the work. I had a nice office. I had an even nicer paycheck.

At age 40, I gave birth to my second daughter.  My original plan was to continue progressing up the ladder at my corporate job, balancing career and growing family but something else was stirring inside me.  Not long after my second daughter’s birth, I had the most crystal-clear moment and heard my calling; it was the time for my next act, it was time to start a new company.  As a product person, I know that one should never, ever launch two big products at the same time; in this case, my new daughter and a new startup. It was time to persevere.

Now at home, I am the mother of two daughters; a teenager and kindergartener.   It is a challenge to balance family and business, but I believe that I am a better entrepreneur because I’m a parent, because I’m a mom.  I have earned a PhD in multi-tasking, managing chaos, and improvising, all critical skills in successful entrepreneurship.

Now it is my turn to instill in my daughters and the future what was instilled in me.  Our adventures in the playground are the first steps towards business and life success; kids fall down so that they can pick themselves up and dust themselves off; encouraging them to climb the taller slide than they are used to and reminding them that it is okay to color outside the lines.  They learn that it is okay to take chances, try new things and ideas and to push the envelope. These are also my daily reminders in leadership.

Learning can also be a two-way-street.  From my teenage daughter, I am learning the humbling lessons that apparently moms don’t know very much.  I have to learn a whole new set of skills to serve a whole new generation of consumers. I get giddy when she teaches me a thing or two about technology in the same way my youngest team members at work come up with the bright new ideas for very old problems.  In an ever-changing world, I must change. I must embrace the new. I must persist.

Most days, I still eat rice.  When I do, I remember that I am from a lineage of women made of steel at their core, that only I have control over how hard I hustle with the gifts I have been given.  I am passing on the legacy of the older women before me to the young daughters at home, and colleagues at work.

I naturally get asked “What’s it like to be a female entrepreneur?” as there are so few of us in my field of digital health.  The numbers speak for themselves. There simply are not enough women CEOs in healthcare, technology, business and government. The bias, discrimination, and harassment that women face is real and is painful.  I have encountered my share of bias in my life. I’m the kid with burn scars on her legs, the immigrant teen who talked funny, and the minority woman health founder and CEO.

None of that even slowed me down, much less stopped me.  I persisted. 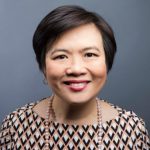 Sally Poblete has been a leader and innovator in the health insurance industry for over 20 years. As a broker and former industry executive herself, she founded Wellthie out of a deep passion for making health insurance more simple and approachable for consumers and small businesses. She had a successful career leading product development at Anthem Blue Cross Blue Shield, one of the nation’s largest health insurance companies.