Today, change is happening at an alarming and unprecedented pace, and this pace will only accelerate. What is opening up for the unwary, or uneducated, is a digital chasm into which the unprepared will fall.

Computing power, new engineering concepts, the reach of the Internet, network capacity, and the proliferation of devices are all increasing exponentially, and innovative engineers and companies are changing the rules of business on a daily basis. Disruption is at every turn.

With all the hype about the digital revolution and the highly publicized case studies and also when we hear about autonomous vehicles, drones, BOTS, holographic lens, and virtual reality, being backed up by artificial intelligence, big data and deep learning, one could be forgiven for thinking that we are already so far into the new digital world that there is not too much more to worry about.

Such a view would be extremely misguided; the reality is that the digital revolution has barely started, and so has the accompanying upheaval.

Uber, and AirBnB, and the like, have been just the very visible tip of a massive iceberg. Over the next three to five years much, much more will change – almost to the point of having to suspend rational thought.

I want to share with you the story of the bricklaying robot, and a rather unique dining experience, and then look at a four billion dollar company with no product, and no service.

Designed by architects Archi-Union, this robot built the undulating exterior of the Chi She Chee She Gallery in Shanghai. The robot was based on car-manufacturing robot technology. Digital tools were used to transform geometric data to digital-fabrication data, and instructions and intelligence for the robot.

And the architects claimed that to build the brick wall with such precision would have not been possible without the robot.

The technique is also being developed for mass production of buildings – which may compete with, or complement, habitable buildings and homes that are today being built using 3D printing.

Next: A virtual journey in the restaurant.

I would invite you to consider the integrated digital dining experience – you decide to go out for dinner, so you ask your voice-activated virtual assistant (Amazon Alexa, or Google Home) to recommend a restaurant based on your culinary tastes and budget. You agree and ask the virtual assistant to make a booking. An Uber or Uber look alike arrives and whisks you off.

You arrive at your confirmed reservation and when you walk through the restaurant door, you are walking into a familiar place – Alexa told the restaurant of your favorite table and the most appropriate food for your genetic profile. Your downloaded Cheerfy app has told the restaurant that this is your sixth visit and what your favorite cocktail is, the staff all know your name; facial recognition software has confirmed you are the correct guest, and Cheerfy has already downloaded your profile to the staffs smart tablets or devices.

The menu appears as a virtual image above your table. You chose your meal, kitchen robot immediately responds.

While you are waiting for your dessert course, you are entertained by a tabletop virtual reality version of the preparation of your food.

During your meal Kinect sensors had picked up hand gestures that sent a request for more wine.

And when you’ve finished eating, there’s no waiting for the bill: you get up and leave, automatically paying for your meal with your phone.

My final example in this short article is Magic Leap. Magic Leap is a US startup company that is working on a head-mounted virtual retinal display that superimposes 3D computer-generated imagery over real world objects, by projecting a digital light field into the user’s eye. Magic Leap is arguably at the forefront of Augmented Reality. Using something called Digital Light field the technology projects images directly into the eye so that it hits the retina. Traditional AR projects fire light at a surface, which bounces back into the eye.

By going directly it is able to “trick” the brain into thinking it’s real. By creating a headset that project directly onto the retina there is no need for screens anymore. Since the resolution and focus of the images are going to be near real, it’s likely that no screen will compare. It also means everything can be adaptive so the display suits the information. But this is a headset that is like no other – it is a headset where one does not exist but in fact uses what appears to be the clear lens of a pair of spectacle as the “projector”.

Despite the fact there is no clear date for shipping, no demonstrable product, no developer kits for engineers, this company which is backed by some of the biggest names in tech and Silicon Valley has a raised over $1.4bn and is valued at $4.5bn.

It is clear bet that the future of Augmented Reality – or Mixed Reality as Magic Leap calls it – is beyond our imagination today, but will dramatically change all our visual, audio and tactile experiences 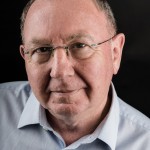 Bill Lewis is an internationally recognized entrepreneur, technologist, writer, international keynote and workshop speaker, mentor, and motivator, who helps transform businesses and people. He is an author of three bestselling books: “Midas and 1000 Cows: An Entrepreneur’s Crazy Journey To Making Millions“, “100 Mistakes of a Start Up CEO“, and “25 Kickass Lessons for the Budding Entrepreneur”. He spoke at the IBM Connect as part of his role as Co-Founder at Temasys Communications.