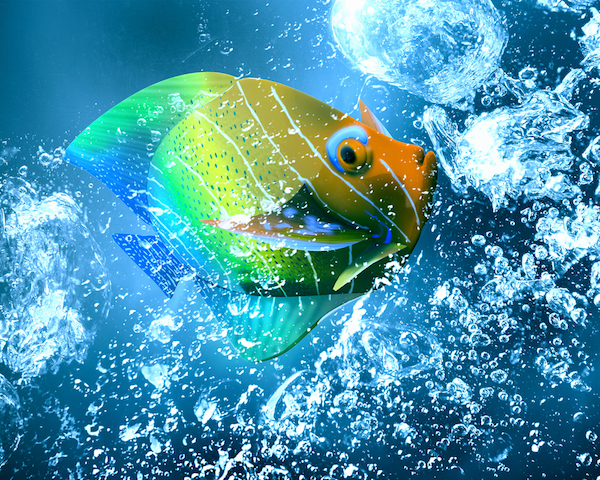 I recently had many of those “fish out of water” experiences while I was on my business trip to Ecuador. I arrive into the new Quito airport. As I get my bags a red, yellow and green traffic type light confronts and guides whether you need to get your bags checked by Immigration or not. If you get a Green light, which I did, out the exit door you go. Red light and into security you go. Traffic lights for bag security, never saw that before. It is OZ like in that you do not know exactly who is controlling the light or why they decide whether you get checked or not.

I now go out of the airport and on to my client’s new warehouse. The workers were in hard hats because of the high racks and heavy boxes on high shelves. Boxes and parts indeed could fall on your head. Here becomes the interesting part: Supervisors on the floor were not in hard hats. The manager with an orange baseball cap wasn’t wearing one either. The owner, she had no hard hat on either. Then it dawned on me and I was a fish out of water. What about me with my bald head? Didn’t I need no hard hat? My head could be crushed! I am scared and more than a little nervous because no one offered me a hard hat!

Today in the States, I find out that hard hats are required. Everyone wears them. Same with safety glasses and whatever else is required.   What is going on in that warehouse in Ecuador??? Are workers heads seen as more valuable than supervisors or the managers?????? Not sure, but I do think it involves hierarchy and class. What is interesting is that the higher up in the perceived hierarchy that you are the more at risk you are. Puts a new spin on from “off with their heads” to “lets squish their heads”. Again as I contemplated this I felt like “a fish out of water”. There was something going on that I did not understand.

Quito, at 10,000 feet, is surrounded by mountains and is at the foot of a 16,000 plus foot mountain. A cable car goes up the mountain to 13,000 feet. Then one can climb, bike or ride a horse the rest of the way. Rene, my friend and guide, had brought his nine year old son Efrain. Like nine year olds here he complained of being hungry and tired. Then ran ahead to hide and spook us. His energy at that altitude was boundless.  Unlike nine year olds here he did not know about star wars and did not have a computer. I found that comforting and disconcerting at the same time. He did know about Mickey Mouse, thank god.

It was a craggy landscape. Like the moon. The trail undulated up and down taking you into the mists of the clouds. We rounded a corner and came upon a group of young people who were twenty or thirty years old. What were they speaking? I pride myself on recognizing languages, what was that young group speaking? They looked like ragamuffins, athletic and when I spoke to them in Spanish they would have none of it. They would only speak to me in English. “We are Russians”, they said. Aha, I concluded, spies and they are no doubt overrunning the country. “We are from a Russian circus that is performing along the Ecuadorian coast”, the young woman said and then they were off.

I was up at 13,000 feet sharing the route with young Russian speaking circus performers from Ukraine. Now I related to that fish and I was also gasping for air.

Where did that horse come from? Horses on mountain trails not so much in my world. I never saw how to get a horse up here. It just appeared. The skinny man on the small and very skinny horse came galloping up at 15,000 feet. Clearly a Russian circus performer who wanted the skinny girl to ride the horse with him. She got on the horse and off they went. I felt better in that the horse was heaving more than I was.

Rene is a middle aged indigenous looking man. He is also a friend that works for an Ecuadorian company that I consult with. He drives me around on my visits and we have become friendly. He had not met and clearly did not know these Germans. That he wanted a picture taken of him with them surprised me and I had no context for it. I was baffled.

When we returned to the cable car that was to take us back to Quito I saw an Ecuadorian youth with a Chicago bull’s jacket. As I passed him, in Spanish, I said I am from Chicago. Suddenly I am surrounded. The dark Ecuadorian tourists wanted a picture of me and the lad wearing the Chicago bull’s jacket. The picture taking went on from there with me with various groupings. I was a rock star! Or maybe it was because I’m from Chicago? Hmmm…? It took at least ten minutes and I did not even get a tip!

As we parted ways smiling and laughing I finally asked Rene what that picture taking was all about? Why I had achieved celebrity status and incidentally, why did you Rene, want your picture taken with the German tourists? He said, quite simply, that for the Ecuadorian Indian it is fun to show their friends pictures with white people from other lands. How different, I thought. I thought this custom was strange and felt foreign. I wondered when that custom started in Ecuador and how diffident that is from the U.S.

What had occurred impacted me like “a fish out of water”. I was left with that by traveling to other places you see things that are different from how things are in your country. Back home no one wants their picture taken with me, even people I know, and I am no celebrity. But that it’s different on a mountain in Ecuador gives me a different perspective. By having a different kind of experience I am left more appreciative of differences and seeing that things are and can be different. It gives me perspective that I can bring to my work, and my life.