One of the biggest challenges facing young leaders today is managing members of their teams who are literally old enough to be their parents. The age difference becomes a gauntlet that Gen Y managers aren’t comfortable taking on and instead they tend to handle the situating in a limited number of ways.

From what I’ve seen of the youthful managers I’ve worked with in the NY ad agency scene, they generally fall into two groups. The first group is a bit intimidated at the prospect of ordering a veteran worker around, and so tends to either avoid the confrontation involved with criticizing that employee’s weak performance or excludes that worker from the “mission critical” stuff. The second group marginalizes the older workers, generally sees them as a roadblock towards getting things done, and waits for the opportunity to downsize them and replace with someone younger. Both management techniques are closed minded and sophmorish.

Here are some strategies I’ve learned in my experience of managing more seasoned workplace veterans which have allowed me to get the most out of abilities and talents.

Accept and Embrace the Age Difference.

Gen Y’s may have the edge when it comes to being tech savvy and up on the latest business trends, but Boomers can bring the value of experience and perspective, through multiple market conditions. For instance, Boomers have experience in a non-digital world and have basic communication skills that Millennials may be lacking, while Millennials have the web on their side. By embracing each other’s differences and learning from each other, you can actually create the perfect work balance.

Focus on Results not the Methodology.

It’s no secret that each generation approaches work differently. As managers, we sometimes focus too much on process, and become critical when someone tackles problem solving a different way than we would. It’s important that older employees are given a chance to deliver results and are put in charge of projects. Although their methods may be different, they can bring viable solutions to the table that other members of the team may not have thought of. Micro-managing these seasoned employees may slow down the process and halt creativity. Pair them with younger employees and watch the magic happen. They are likely to deliver significant results in a timely fashion.

Respect each person’s contributions, from entry-level to management. Having members from different generations means more viewpoints and creativity – which gives your business an advantage –so use it. You can never over-communicate your position that everyone’s opinion and ideas count. And foster a cross-generation sentiment that no idea is a bad one and let the ideas flow. It’s important that you and your team respect and consider all ideas and together come to a successful conclusion.

Earn Their Respect to Reap Dividends.

When it comes to your more experienced team members, it’s important that they respect you and trust the decisions you make for the company. They will respect you for doing your work and doing it well. Don’t set out to “prove yourself” – it’s unnecessary as you earned your role. Keep in mind that you have to give respect to earn respect. Make sure that you remain approachable and open to your team’s ideas but ultimately you make the final decision.  They don’t necessarily have to love you, but it’s important they respect the way you conduct business.

As a younger boss, it may be difficult to confront older employees which stems from a traditional values system that stressed a unquestioning respect of your elders.  But in the business world, you need to be the boss and address performance issues in staff – young or old.  It’s important not to make special allowances for older employees because you feel uncomfortable confronting them. As a leader, it’s important to tackle issues head on in an academic and respectful way. 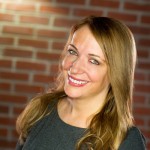 As President of NY digital marketing agency, The EGC Group, Nicole Larrauri spearheads the business’s marketing activities and strategic direction. She is a featured contributor to Agency Post, was named a “40 Under 40” honoree in the Long Island Business News (LIBN), and was listed among the “Five People to Watch in Advertising” by Newsday and LIBN.