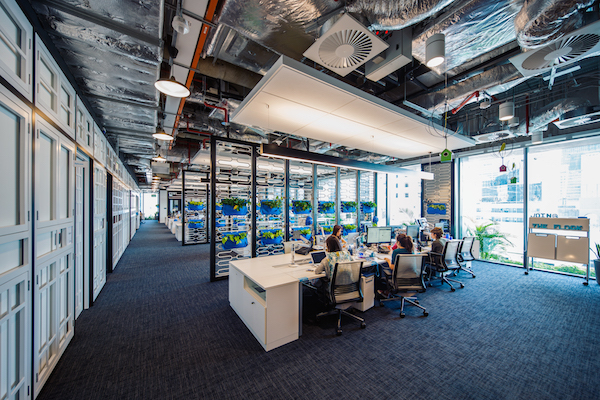 Twitter last week announced that it has opened its office in Singapore, officially designating it as its headquarters for the Asia Pacific region. The company is also looking to add over 100 jobs over coming years to “meet the growing demand from its users, partners and advertisers” in Asia Pacific, signalling that it is hedging its bets that continued growth – in terms of users and revenue – is likely to come from this part of the world.

Twitter first opened in Singapore in the fall of 2013 operating out of a serviced office, but its Singapore-based team – which quickly grew to 80 staff members in under two years – means that it required a far larger space in order to accommodate for expansion. The new regional headquarters will be home to a wide range of business functions, including sales, partnerships, marketing, HR, finance, user services, legal, policy, and trust & safety. The new office also houses #RealTimeLab, a physical social media “war-room” where partners and clients can track real time live Twitter campaigns, analytics and data visualizations, observing key cultural moments from around the region such as national elections, sporting events, entertainment shows and disaster responses.

“The Asia Pacific region is already one of the largest and fastest growing regions for Twitter today, and there still is enormous potential to show people, partners and advertisers the value of our platform, from Japan to India to Australia,” says Shailesh Rao, Twitter’s Vice President of Asia Pacific, Americas and Emerging Markets. “We’re capitalizing on this growth in 2015 by making strategic investments across the region – from opening new offices and aggressively hiring staff, to acquiring companies and building local product experiences.”

“This is a milestone in Twitter’s history and we’re hiring the best and brightest to take our company to the next phase of regional growth as well as create a hub of innovation in Singapore,” affirms Aliza Knox, Twitter’s Managing Director of Online Sales, Asia Pacific.

“As one of the top technology platforms in the world today, we were looking for a regional base in a pro-business environment with other regional leaders and customers, easy connectivity to the rest of the region, and a world-class talent pool across multiple functions – Singapore was the clear choice for us,” Knox adds.

The news comes as Twitter CEO Dick Costolo abruptly indicating that he would be stepping down amid increasing scrutiny of the company’s slow user and revenue growth. Co-founder Jack Dorsey will replace Costolo on an interim basis.