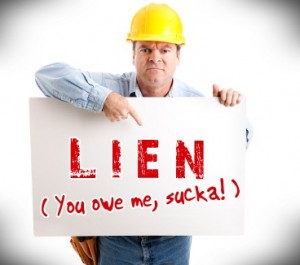 A lot of people believe that once a mechanic’s lien is filed, it will stay on record permanently, in the same way as a mortgage or grant deed would. However, this isn’t true at all. The rules vary on a state to state basis. California, for instance, only recognizes a lien for 90 days. If payment has not been received by then, the mechanic must file a full lawsuit to foreclose on the property. If they don’t the lien is null and void.

Why the Misconception Exists.

The reason why people don’t quite understand what happens when they file a lien is because the recorder’s office has very complicated procedures. As soon as a lien has been filed, it is a public record. This record is not automatically erased if the time has expired before a lawsuit was filed. The record will continue to exist, it will simple cease to be enforceable. Hence, don’t fall into the trap of thinking a lien is valid so long as it is on record.

The lien papers, in other words, are only the first step towards actually receiving payment. If no lawsuit follows to foreclose on the property and the judge agrees that the lien is valid, it will lose all its legal standing. Unfortunately, this means that in most cases, you will have to hire an expensive attorney, because most people will hope you are unable to afford this, thereby rendering the lien itself invalid. On the other hand, if you do file a lawsuit, you are almost guaranteed to be able to settle before trial, so the costs should not be too high.

What Happens if a Missed Deadline Lien Is on Your Property?

Often, people file mechanics liens and then do not start a lawsuit on time. If you are the property owner, you will then need to take the necessary steps to have the lien removed. The procedure again varies from one state the other. Some have petitions and special motions to have the record expunged of the lien, but this can be costly. However, you may find that the costs are assessed against the party who filed the lien in the first place.

A cheaper and often more successful method of having the lien removed is to have an attorney write to the party who filed it in the first place. If they do not respond, you will have to decide whether to simply leave the lien in place, or whether to take legal action to release it. Although having a lien on your property may make it more difficult for you to sell, you will then have documents proving that the lien has expired and is hence null and void.

Unfortunately, some claimants become emotionally involved, are really stubborn or are simply lazy. It is possible that they do not want to remove a lien, even if its validity has expired. You will then more than likely have to complete court action. The only other option you have is to contact the contractor license board in your state and ask whether you can file a request to have the contractor disciplined. If this is possible, you can literally force their hand without having to turn to an expensive attorney.