By Russell Harley, veteran project manager and Director at PMO 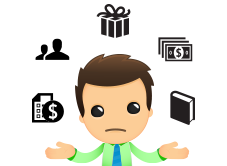 Unlike the Triple Constraint, you can have all three of the Limiter functioning at high levels, low levels, or anywhere in between; however, the sum of the parts is not greater than the whole in this case. The weakest one of the three in the Limiter will limit how successful the project will be and how the issues that arise will be dealt with.

Since there is a huge amount of information about team building, team management, and an article on “Five Ways to be a be a More Effective Project Manager” already written, it seemed like a good time to write about project sponsorship and the ways to become a great sponsor: Hence this article:

This seems so simple, but it is ignored so much of the time. If you are a project sponsor, then be involved from day one. Not just with a weekly meeting with the project manager, but with the entire team. If the project is important to the business, then it should be important enough for you to actually be involved from the beginning.

So attend every single project team meeting, especially the project status meetings if nothing else. If the entire team knows you will be there on a regular basis, then they will make every effort themselves to also attend. Regardless of what everyone thinks, just a project manager saying people having to attend a project meeting is definitely not the same as the team knowing that a sponsor will be attending them on a regular basis.

Having the majority of the project team also attend regularly will have a huge positive impact on the project. So if you want the project to be a success, this single action can reap huge dividends in this regard. “But what if I really do not have the time?” you say. “Can I delegate?”

However, if delegation is absolutely needed, then what you really have to do is basically create a new project sponsor. This new person that the project sponsorship has been turned over to should have all the abilities the original sponsor (i.e. you) had: Control over resources, budget, etc. Typically this is difficult to do in a corporate environment since levels of controls are based on job titles by human resources and, or finance.

As a sponsor, you obviously helped form the project team – you were involved, right? If not, see the first heading again – So you chose people for their technical expertise, in regards to the project needs. So when an issue arises and the SMEs on the team make a recommendation, do not second guess them. Or worse, go to other internal/external sources to see if they are right or not. As soon as you do either of these, the team is destroyed and no one is going to put their best effort out going forward.

If you want a second opinion (and sometimes it is a good idea to do so), just ask the SMEs themselves to come up with two or three other ways. Of course if the project manager is doing a good job, then this would already have been done. Once you have all the options from your SMEs then make a decision based off of the options they presented you. This way, trust is built and the project team feels they are listened to versus being ignored. Unfortunately, ignoring the project team’s recommendations by project sponsors happens all too often.

The Project Manager is NOT a Sponsor.

Since the project manager is going to all these meetings anyway and knows everything that is going on (not likely) then let’s make them the sponsor. While this might sound good, it is a really, really bad idea. If you take this thinking to the fullest point, then the project manager could also be the project team too. What a cost savings.

This is just a very weak form of delegation. This is even worse than the one above with the director and vice president. Even if you could give the project manger all the decision making tools and authority to be a sponsor, you have completely removed a critical part of the checks and balances of a project. There would be nothing to stop the team from making sure they got what they needed, regardless of what other things the business needed to be completed. Even for projects that are more important than this one.

Hopefully these suggestions will improve project sponsorship for those chosen to be sponsors. As stated before, having a great project manager and a great project team with a poor, or absent sponsor will not do as well as an average team with an involved sponsor. Active sponsorship with weekly – or more – involvement can turn even a failing project around.

But rather than waiting until a project is at a critical failure point, would it not have been better to be involved from the start, so this could have been prevented or at least mitigated? In the interest of saving time, sponsors absent themselves to weekly (if we are lucky) or monthly meetings with just the project manager. Even the greatest project manager is not going to be able to convey everything that went on in a week, much less a month, versus the sponsor actually being present too.

By taking the suggestions above, you, as a sponsor, will actually save time by doing these things. You will be able to understand the project, the issues, resolutions, etc. in depth. So when you are asked by peers and those above, you will look like an expert and know what you’re talking about; versus saying, “Let me check with the project manager and get back to you.” So is that not worth a few hours a week of your time?

Russell Harley is a veteran project manager and PMO director, passionate about helping organizations embrace world-class project management practices and “climb out of the quicksand” in terms of gaining control over complex, ever-changing project portfolios. The best practices he advocates stem from key learning’s acquired from his M.S Degree in Project Management, combined with over 20 years of hands-on PM experience in the high technology, telecommunications, and clean energy sectors.

How Digital Transformation Is Changing Project Management: 4 Things To Know