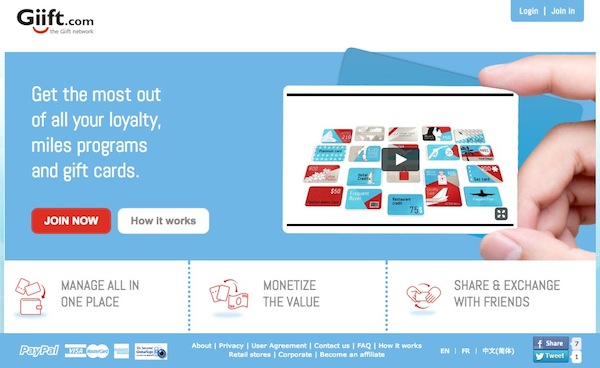 How many cards do you have in your wallet? If you take away your credit cards, you’re likely to find an entire array of other cards that run the gamut from loyalty cards from your favorite stores, gym membership cards to the one that carries your affiliation to a certain airline program. In fact, you’ll probably be surprised by the number of cards you’re carrying at any one point. And it’s pretty much the same for almost everyone else.

In fact the number of loyalty card, gift card and membership programs available in the market can be mind-boggling. Take the gift card market, for example, is $110 billion alone for 2012 in the United States, with more than 276 million people exchanging these stored value cards. It’s the reason why in recent years a number of startups, such as the mobile apps Key Ring and Card Star – have risen to tackle the problem. The idea is simple – turn those cards into digital form, and slim down those wallets.

And then there’s Giift.com. Touted as the world’s largest loyalty and card program network, the application allows users to combine many of the card programs available globally onto one platform, and even keep track and manage their accumulated rewards such as points or air miles in one place. All users need to do is to input their membership details onto the platform, and then easily manage their points – as well as take certain actions such as redeeming their rewards – through the system. Giift.com currently tracks more than 500 programs and cards worldwide, so it should encompass many if not most of those we regularly use.

“We believe Giift.com has a strong value proposition for both users and business partners,” says Pascal Xatart, CEO and co-founder of Giift.com. “Its highly intuitive and accessible interface belies a complex backend structure that seeks to integrate virtually every existing card and loyalty program out there on a singular platform.”

But it gets better. Giift.com allows users to trade cards amongst themselves – for example if you receive a gift card for a retailer whos products you have no use for, you can actually trade that card on Giift.com for one more useful to you. Giift.com even offers a proprietary digital stored value card called the Universal Giift Card that lets you trade for other cards, essentially enabling Giift.com as a form of digital escrow service. You can even trade your gift cards for cash (or at least, have the value credited to your PayPal account).

Here’s the fun bit. Many of us outside of the United States often cannot purchase an item from a US-based retailer as we don’t possess a US credit card. As Giift.com continues to grow and add gift card programs from such US-based retailers, we’ll be able to trade for gift cards offered by these retailers and enabling us to buy items without the need for a US credit card.

“As the community of both users and brand programs grow, we believe Giift.com is set to change the landscape of how loyalty programs operate and are utilized, to ultimately benefit users and businesses around the world.”