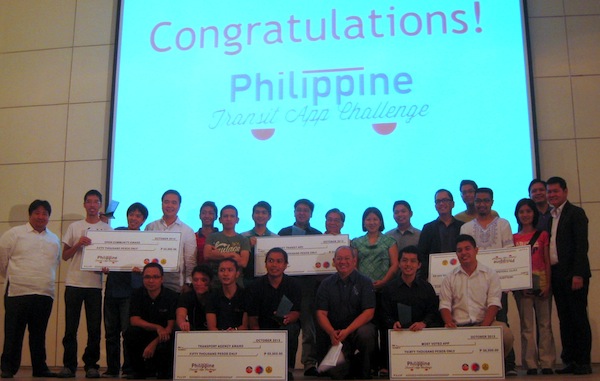 Traffic in Southeast Asia’s megacities can be notoriously bad – for example, traffic in central Bangkok or Jakarta can come to an absolute standstill by 6pm. In Manila, a study by the University of the Philippines National Center for Transportation Study (UP NCTS) last year placed the average annual losses incurred due to traffic congestion in Metro Manila at over P137 billion as of 2011. The study noted that the country has lost more than P1.5 trillion since 2001 due to traffic – a massive loss in productivity.

To that effect, Philippines’ Department of Transportation and Communication’s (DOTC) recently conducted a app challenge called the Philippine Transit App Challenge that invited developers across the country to create applications in a three-month hack-at-home competition to develop an app that will ease commuting in the megacities of Cebu and Metro Manila.

It attracted 17 entries from which 10 finalists were chosen. Last week, competition finalists got to demonstrate how their apps worked and the various benefits each offered.

Trip Barker, a community-based trip planner for mass transit systems through which users can share real-time weather, traffic, and events with their community, won the Best App Award and P100,000.00 plus a nomination to the 2014 Mobile Premier Awards at the Mobile World Congress in Barcelona, Spain next February. Sakay.ph, a web- and SMS-based app that gives commuters printable transit directions for
jeepneys, buses, and trains in Metro Manila, took the Open Community Award, while the Transport Award went to Transit.com.ph for its app that provides Cebu City commuters with route-planning tools as well as a route editor for city planners and contributors. Manila Train Guide, a trip-planning app for Metro Manila’s railways, which highlights nearby places of interest, bagged the Inclusive Technology Award. Rklamo, an app that provides a tipping mechanism via SMS for PUV drivers with good behavior, received the Voter’s Choice award.

Transport Secretary Joseph Emilio Aguinaldo Abaya thanked the developers for sharing their talent in helping provide tools to the commuting public for navigating the two giant metros. “I commend all of the participants to our App Challenge, especially the finalists who are here tonight, for spending the last three months being a part of the solution to one of our country’s toughest problems,” Abaya said at the ceremony.