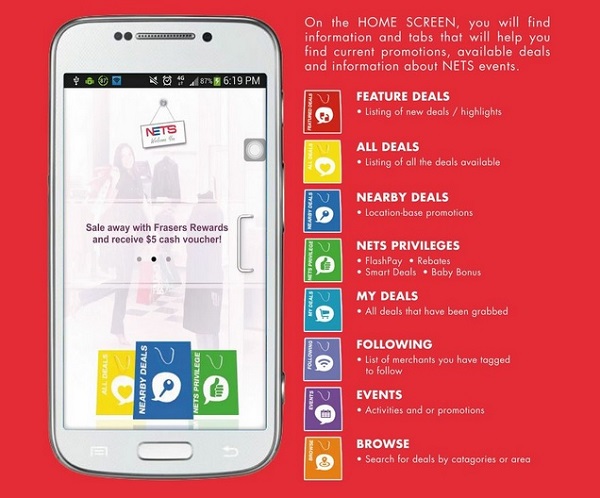 Payment solutions provider NETS – founded as a national payment system by the Monetary Authority of Singapore and owned by Singapore’s largest banks, DBS Bank, OCBC Bank and United Overseas Bank (UOB) – has launched a location-based mobile application called NETS Savers that helps users discover special deals from its network of merchants across the island. Currently available on iOS and Android, users can find, redeem and share NETS promotions such as rebates, special one-off purchases and other deals that are only available to NETS users.

The app essentially tracks and lists deals and promotions by a user’s location (within 500 m) in various categories such as fashion, health, wellness and beauty, F&B etc, and pushes out notifications when you’re nearby a special deal. Users only need to show the coupon on their phones to the merchant in order to redeem a deal. There are also what NETS calls “Special Deals”, a daily deal-style promotion that is a deal limited by quantity, price or time for redemption. The UI can be a little clumsy and counter-intuitive,  and categorizations can be streamlined better – what does the category Baby Bonus mean? – but the developers have promised to look into the issue.

NETS has so far managed to get around 100 of its 20,000-strong network of merchants to participate in providing deals for the NETS Savers, but Singapore merchants already using NETS as a payment option should seriously contemplate listing their deals on the platform. In fact, listing deals here is free unlike using those daily deal type sites, and likely to be less cumbersome than working with credit cards and banks; the additional exposure can only benefit small business owners.