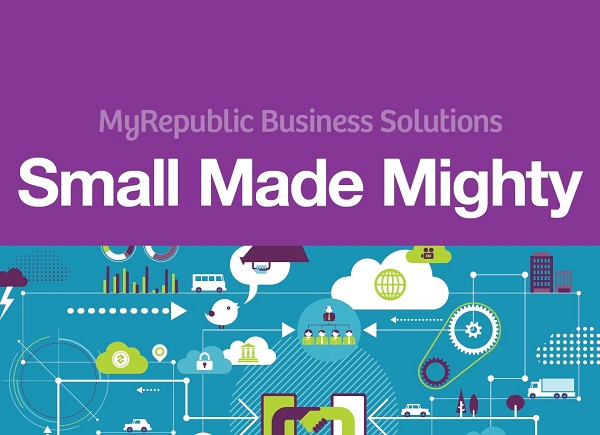 You can accuse Singapore Internet service provider MyRepublic of many things, but lack of ambition is unlikely to be one of them. Since its launch in February 2012, the little upstart has launched various initiatives aimed at challenging the stranglehold on the broadband services space largely dominated by incumbents SingTel and Starhub. Yesterday MyRepublic announced another weapon in its growing arsenal – its entrance into the enterprise broadband space, with a three-tiered product offering for small, medium and large companies.

While the Next Generation National Broadband Network (NBN) has been operational over 3 years and has rolled out to over 95% of commercial buildings island-wide, less than 20% of Singapore businesses are on fibre broadband. That’s compared to 40% of Singapore home that have made the switch to the new network. And that’s where MyRepublic is seeing its next opportunity for growth. It is collaborating with various partners for its end-to-end products: Mako Networks (network management), CISCO (security), OSINet (cloud computing) and Google Apps (hosting).

“IT systems for security, productivity and collaboration can dramatically increase an SME’s efficiency and competitiveness. But they have historically been very costly,” says MyRepublic CEO Malcolm Rodrigues. “With cloud computing, SMEs can now use many of the same applications and services large enterprises do at a fraction of the cost. And with the simplification in user interfaces, anyone can configure and operate these applications without large IT departments.”

That the Internet provider understands the benefits of cloud computing for the SME space is beyond any doubt – the 53 people strong outfit has its entire billing and CRM using the cloud, and its own offices contain not a single server. In fact the company’s IT department numbers only 2 people.

“We believe that the National Fibre Broadband initiative allows for more innovative offerings, and it’s a natural course to want to introduce that into the SME market,” says Mr. Rodrigues, “For the consumer market, we have been disruptive in the industry and have brought consumers more value through our offerings. With SMEs, we look to do the same.”