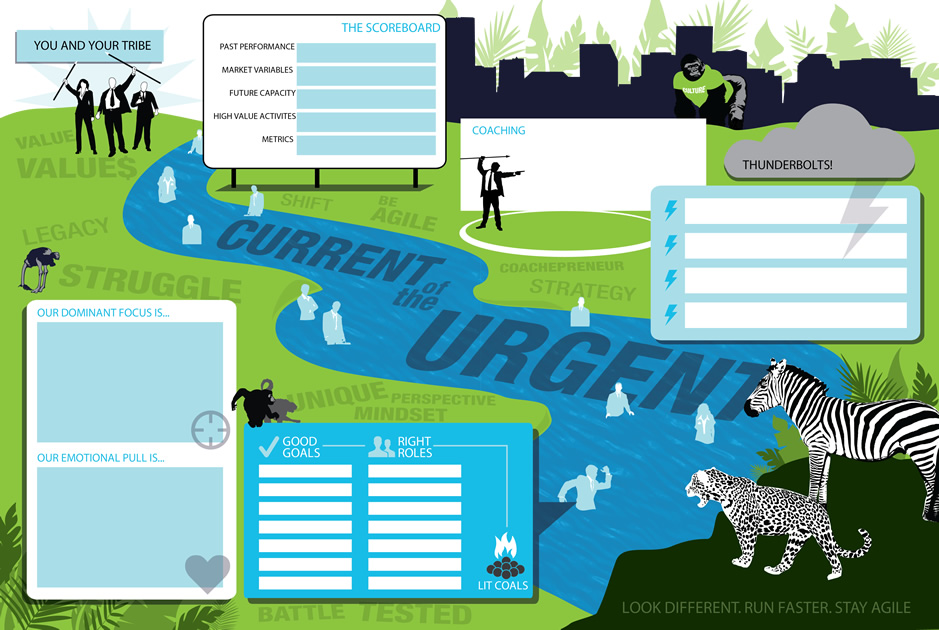 by Micheal J. Burt and Colby B. Jubenville, co-authors of “Zebras and Cheetahs: Look Different and Stay Agile to Survive the Business Jungle“

Look around. Has a 10,000-pound gorilla taken over your company? Before you reply with a quick “no” and refocus on your to-do list, bear in mind that this giant beast is known by a second name — culture. And understand that taming him is imperative because his destructive behaviors can keep your company’s tribe from doing what it was brought together to do.

Here are some tell-tale signs that he has adopted your organization as his habitat:

• There are several positive change initiatives in the works, but the old guard refuses to alter “the way we’ve always done things.” They aren’t receptive to new hires and won’t take an active role in training them. Rather than working to move the company forward, they spend most of their day making excuses for why things should stay the same.

• Your employees are constantly patting themselves and each other on the backs. Unfortunately, they’re often celebrating empty wins like getting a client’s order right on the second try or passing an angry customer on to another department. These “celebrations” only serve as a smokescreen to hide stagnation and lack of progress.

• Most people in your organization seem too comfortable. They gravitate toward and “nest” in the familiar. At times, you wonder if innovation, creativity, and motivation are foreign concepts to them.

Unfortunately, the gorilla’s constant bellowing drowns out other messages in the concrete jungle, which allows poisonous cultures to take entire organizations hostage. The good news is, prepared and proactive leaders can provide clarity, unite the tribe, and — yes — tame that unruly gorilla so that cooperation, growth, and innovation are once again in the spotlight.

Leaders who can successfully go nose to nose with culture gorillas are members of a newly evolving breed: Zebra and Cheetah (or Z&C) Leaders.

Zebra and Cheetah Leaders are so called because they exhibit qualities of both breeds. Like zebras, they boast a distinctive appearance that others can easily recognize. Like cheetahs, they possess great speed and are particularly quick accelerators. And like both, they have an ability to utilize their senses so well that they excel in adapting to their environments. In other words, these are leaders who are able to adapt to the fast-paced, always-changing, and highly competitive business world, and who are capable of leading diverse tribes within it.

Zebra and Cheetah Leaders recognize that 10,000-pound gorillas are sustained by individuals who, unlike themselves, have refused to adapt to the ever-changing landscape of reality. There are four things Z&C Leaders must do in order to stop feeding the gorilla… and create clarity amid the chaos of the concrete jungle:

Get real about the reality your tribe is facing.

Chances are, the path your tribe once took through the jungle was wide, well marked, and free of most significant obstacles. You could count on easily visible indicators, typical benchmarks, and annual performance ratings to keep you going in the right direction. And if any doubt cropped up, your organization’s fearless leader — the lion-like king of the jungle — would dictate who should lead, who should follow, and what should be done. To hear your change-averse gorilla tell it, that’s still an accurate portrayal of reality. But don’t let him fool you – “the good old days” are long gone.

In today’s competitive, constantly changing global economy, organizations whose cultures expect the journey through the concrete jungle to be easy won’t last long. These days, the path can quickly change, or disappear altogether. You might encounter rockslides or quicksand at any moment. And predators — otherwise known as competitors — will be constantly nipping at your heels.

That’s why Z&C Leaders are committed to drawing a clear picture of the true, actual circumstances their organizations face, regardless of how positive or negative they may be. Only then will you be able to cut through the smokescreen your gorilla may be throwing up and unite your tribe in pursuit of an overarching dominant aspiration.

Make sure your tribe understands the complex order of the concrete jungle.

In nature, jungles are incredibly complex. They contain a dizzying amount of animals and plants that are competing for resources and survival. But despite (or in some cases, because of) the occasional casualty, the ecosystem supports the many populations that call it “home” and enables them to thrive.

Ideally, that’s the case within your organization, too. (Think about the corporate buzzword “synergy,” which refers to diverse individuals accomplishing more together than they could alone.) However, it doesn’t matter how balanced and well calibrated your tribe is on paper if all of its members don’t understand where, how, and why they fit.

It’s a natural instinct for people to worry about their futures. That’s why so often new ideas, policies, and people spark pushback in the concrete jungle. Established tribe members worry that they’re being edged out or that they’re entering the endangered species list. And that type of uncertainty feeds the gorilla. It’ll beat its chest, bellow, and attack what it mistakenly perceives to be the competition, effectively halting growth and progress.

Remember, as a Z&C Leader, it’s imperative for you to not only leverage your tribe’s talents, but to make sure all of its members understand where they fit within your organization’s ecosystem, both now and in the future.

Once tribe members understand the order of the jungle they inhabit, Zebra and Cheetah Leaders must outline what, exactly, constitutes success. Left to their own devices, each individual is likely to define that outcome differently, usually in whatever way would benefit them most personally. In this scenario, you’re likely to have some employees who mistakenly believe they’ve “made it,” while others struggle, strive, and snipe their way in the wrong direction.

We refer to the force of a tribe working toward success as collective passion. Why? Well first, collective relates to the fact that everyone in the tribe is working together toward a shared dominant aspiration, or goal. The word passion has a double meaning. Its modern context involves deep affinity for something, and its Latin root passio means ‘to suffer.’

Make no mistake: The struggle to survive and succeed in the global economy won’t always be pleasant or easy. But if your tribe goes through the metaphorical fire together, it will emerge as a stronger and more efficient group. Stated plainly, collective passion helps create a cooperative, unified environment within your organization — an environment in which gorillas can’t survive.

Good news: This fourth step in overcoming chaos and keeping your corner of the concrete jungle gorilla-free is the easiest. You’ll find that when your tribe’s members have collectively survived the crucible and reached the first level of success you’ve set for them, their relationships with each other will change.

Specifically, competition within the tribe will naturally be replaced by new levels of cooperation once everyone sees what they’re all capable of accomplishing together. This will then allow the competitive focus to fall where it belongs: outside the tribe.

This is the position you want to be in as a Z&C Leader: basing your decisions on factors within the concrete jungle instead of focusing on factors related to the tribe. Just be sure to keep a close eye out for any signs that the culture gorilla might be creeping up on you. If you so much as smell him (for example, you notice tribe members excusing their own inadequacies or trying to backstab those they see as more productive workers), nip those behaviors in the bud.

There will always be chaos in the concrete jungle as a whole, but that doesn’t have to be the case within your specific organization. When you succeed in kicking the gorilla out and getting your tribe members to trust their Zebra and Cheetah Leader, your organization will enjoy increased transparency, accountability, and productivity.

Micheal J. Burt and Colby B. Jubenville are co-authors of “Zebras and Cheetahs: Look Different and Stay Agile to Survive the Business Jungle“. Part coach, part entrepreneur, and all leader, Coach Burt is the go-to guy for entrepreneurs who want to become people of interest, salespeople who want to be superstars, and managers who want to be coaches. Jubenville holds an academic appointment at Middle Tennessee State University and is principal of Red Herring Innovation and Design.

The Cost of Compromise: Six Reasons Why You Shouldn’t Lower Your Standards When Hiring Salespeople