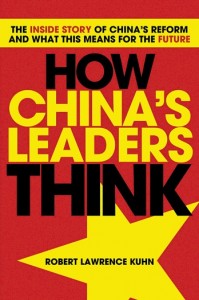 When Internet giant Google threatened to pull out of China in 2010, few were aware of the paradox that the Internet brings to China’s leaders beyond the political fodder.

In “How China’s Leaders Think: The Inside Story of China’s Past, Current and Future Leaders“, Robert Kuhn, an international investment banker who has advised the Chinese government for over two decades, notes that Chinese leaders recognize that free access to information is critical for technological advancement and competitive success in world markets.

“On the other hand, they worry about potentially disruptive consequences of such free access which can deliver malicious, salacious and seditious information,” Kuhn says.

“Hence the dilemma: restrict information and retard progress? Or remove restriction and risk instability?” he adds.

Through interviews with over 100 Chinese leaders, including Cai Mingzhao, former deputy director of the Chinese government’s propaganda department, Kuhn offers insight into complex issues that China faces during its meteoric rise over the last 30 years.

According to Kuhn, Cai maintains that China is in transition and needs to maintain social security by blocking “disruptive, pornographic or otherwise undesirable” websites.

Censorship is necessary, Cai says, because China is evolving from a planned economy to a market-based one. This transition can bring tensions that can be magnified by the power of the Internet.

Kuhn offers the example of discrepancies in pay-outs for retrenched workers in different Chinese enterprises and geographies: “If these differences are highlighted online, it could upset people and cause instability – and even turn regional issues into national problems.”

However, he fails to question Cai on how the Chinese government is preventing Chinese equivalents of blocked U.S. websites – such as Facebook and Twitter – from being used as platforms to raise similar issues that could upset China’s stability.

Perhaps Chinese censors feel they have more leverage in getting local website owners to practice “self-discipline”, which Cai says is still lacking as evident by the pornographic content created by some enterprises to increase website traffic.

“When you can behave yourself and self-administrate, the government will be happy to step by and rest,” Cai adds.

Maintaining stability and building a harmonious society has been central to China’s Scientific Perspective on Development, a framework for sustainable development conceived by former Chinese President Hu Jintao. The nation-building blueprint was ratified into the Chinese Communist Party’s Constitution in 2007.

Today, most Chinese government policies including Internet regulation, environmental protection and banking reform are rooted in Hu’s framework in one way or another, though Kuhn does not always make that relation explicit.

As an example, in explaining how Hu’s framework was applied in Jiangsu’s development, Kuhn merely listed the province’s economic, environmental and educational accolades with scant details on how they were achieved.

Moreover, some of Kuhn’s data and information on Jiangsu, such as the number of private companies, date back to 2006. Given that the book was published in 2010, more recent data could have been provided, including changes to provincial leadership.

Li Yuanchao, for instance, was stated as the party secretary of Jiangsu when Liang Baohua has already succeeded him since 2007.

Despite these shortcomings, the book offers China watchers refreshing insight into the minds of those leading the world’s second largest economy.

According to Shao Ning, director-general of the Department of Enterprise Reform at the State Economic and Trade Commission, China’s growing income gap between the rich and poor is natural and could help spur economic efficiency.

In traditional Chinese culture, Shao says, egalitarianism did not play a significant role and only came to prominence with the communist idea of equal distribution.

He added that communism is supposed to be built upon a very wealthy society created through hard work by everyone, but “given the mindset of our society and the current level of development, I’m not sure that kind of egalitarianism is realistic.”

“Stressing greater distribution efficiency and creating a fairer society are the best ways to go,” Shao notes, adding that the government should actively redistribute wealth by taxing the rich.

Kuhn’s access to a handful of head honchos in China Inc also reveals the tenacity of Chinese entrepreneurs.

Wang Hai, chief executive of shoemaker Doublestar noted that it was his experience in the Vietnam War that gave him the willpower to compete in the shoe market.

“To be successful on either of these battlefields, you first need to have the will to defeat your enemies,” says Wang who started peddling his shoes to department stores when they failed to sell in the 1980s.

This was considered a menial task that senior managers in China’s old planned economy would not take up.

Because of Wang’s dogged determination to understand market forces, Doublestar is now the biggest shoemaker in China with 3,000 chain stores, 40,000 employees and healthy profit margins.

But Kuhn never touched on what Wang did to engineer the turnaround at Doublestar after approaching the stores, leaving readers with more questions than answers.

The last few chapters, dedicated to dispelling misconceptions about China arising out of high expectations on the country’s international responsibility and “media-directed preconditioning” sums up the book’s goal to promote greater understanding of China.

An unnamed Chinese leader told Kuhn: “Everybody always exaggerates China. When for more than a century the world thought us weak, we weren’t really so weak. And now when the world thinks us strong, we aren’t really so strong (sic).”

Calling for a more balanced view, Kuhn argues that an aggressive China does not make sense in the real world, unless an economic catastrophe occurs.

He predicts that China’s economy will grow, living standards will rise and the country will be more democratic and prosperous – a bulwark of stability in world geopolitics.

Along the way, China will continue to embrace communism, Kuhn says, though the term now stands for something beyond the 19th century system of public ownership and centrally planned production.

“To reach this ideal state, China must pass through a stage that looks a lot like capitalism – indeed, some suggest that capitalism is the early or first stage of communism,” he adds.

[This review was first posted on technology Techgoondu.]

Aaron Tan had been a technology journalist for the last four years, specializing in enterprise technology at ZDNet Asia and The Straits Times Digital Life. He is currently involved in R&D in the information services industry.