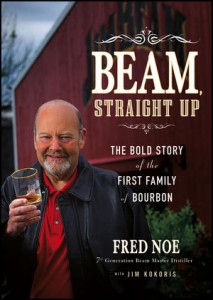 What does it mean to create and dominate an entire category in an industry? Fred Noe may know a little about it; after all, his family – with the surname Beam – pretty much created one, and proceeded to build one of the largest and most iconic companies in the alcohol business. Still need a hint? It’s Beam Inc, makers of Jim Beam bourbon whiskey.

Fred Noe, or Frederick Booker Noe III, is a 7th-generation Beam – Jim Beam, of whom the famous whiskey is named after, is his great grandfather – and the company’s Master Distiller. His newly released book, “Beam, Straight Up“, is an inside look at the family that’s pretty much created the Kentucky bourbon whiskey category, and helped cement the drink as America’s “native spirit”.

The book looks at the history of how the company came about, the evolution of bourbon, and chronicles the impact the various generations of Beams that has inherited the reins of the company, right down to Fred Noe. He shares the Beam journey, complete with fortunes and hardships, including the difficulties faced during the Prohibition of 1920 to 1933. Much of “Beam, Straight Up” is autobiographical, but Noe also pays significant tribute to his father Booker, who helped bring the company into modern times.

Some parts of the book – special cocktail and food recipes, primers on the different types of whiskies (or whiskys) or how to appreciate drinking bourbon – aren’t quite as relevant to a business owner or entrepreneur (unless you love your alcohol, which I’m sure some of us are). Thankfully, there’s one entire chapter where Noe shares valuable insights on how to build, maintain and grow a brand.

What’s really interesting to me, however, is reading about the dynamics between members of what is essentially a huge family business. For example, Noe obliquely shares some of the many difficulties and challenges all family businesses will face, especially the issues of succession. He also looks at the challenge of innovation to keep up with the times – realizing that the market for bourbon is shrinking and hence having to penetrate into other categories, amongst others.

It’s uncanny, but you’ll find you may just hear a Kentucky drawl as you go through the pages, but by and large “Beam, Straight Up” is a great read.

It may make you mighty thirsty, though.