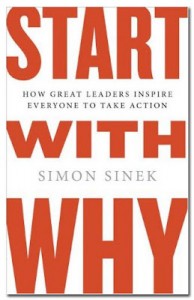 A company starts off with great fanfare, led by a visionary leader who brings it to new heights and grows it year after year. There is much clarity in what it does and it attracts a loyal following of customers and fans. Employees who work there are passionate about what they do. Every action it takes is aligned to its core values and beliefs.

Suddenly, the CEO resigns, retires or is booted out of the organization. Initially, the momentum generated still propels the firm forward. However, over time, it loses its steam. Performance becomes lackluster until the former leader returns to save the company from ruin. This has happened with companies such as Apple (Steve Jobs) and Starbucks (Howard Schultz).

What is the magic ingredient embodied by these icons of business?

The answer, according to Simon Sinek, is that they inspire others to take action by beginning with “Why”.

Anchoring its core ideas in psychology and human behavior, “Start with Why: How Great Leaders Inspire Everyone to Take Action” teaches us that outstanding leaders and organizations achieve a disproportionate degree of influence by following the principles of the “Golden Circle”. The circle comprises three concentric rings with “WHY” in the core, followed by “HOW” and finally “WHAT”.

This can be represented by the figure below: 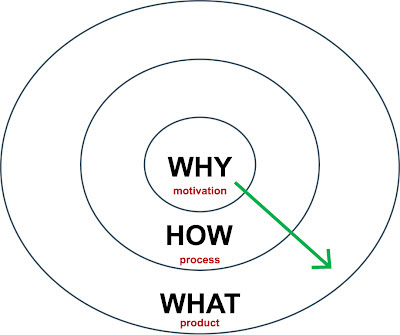 By beginning with “Why”, inspiring leaders and organizations can leverage on the beliefs and aspirations of their employees and their customers. This allows them to tap onto a deeper vein of trust, belief and passion which transcends the common attributes of competitiveness such as quality, features, benefits, service and price.

Indeed, the most successful firms have the clarity of “Why”, discipline of “How” and consistency of “What” – in that order.

Drawing upon human biology, Sinek equates the positions of “Why”, “How” and “What” in the Golden Circle with the relative positions of the deeper Limbic Brain and the outer Neocortex of our human brain. The former is responsible for feelings such as trust, loyalty and decision making while the latter handles rational and analytical thought as well as language.

This is why companies and persons that can tap onto the intimate recesses of the Limbic Brain through clearly articulated “Whys” are a lot more successful at motivating people to act than those focused on the rational attributes of “Hows” and “Whats”.

Expanding further upon the concept of the Golden Circle, the book proposes that organizations need to be hierarchically organised in a conical shaped fashion with the “Whys” on top, followed by the “Hows” (staffed by able lieutenants who are great executors), and “Whats” below. It is the “Whats” that the marketplace eventually sees as the expression of a company’s “Whys”. 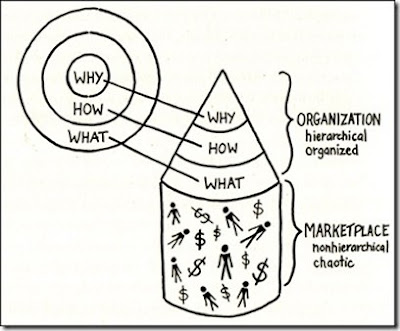 To exert an inordinate influence, Sinek advises companies to focus on the “innovators” and “early adopters” (re: Diffusion of Innovations curve) to be their key customers. This group would likely be more loyal and adventurous, embodying the spirit of the organization as well as the beliefs of its founders.

Towards the end, the book warned one against losing one’s “Why” by being too obsessed with the machinery of the organization or the wishes of the stock exchanges. To sustain one’s business over the long haul, it is necessary for the organization to continually hold on to its beliefs and values and to find ways to concretise this in its DNA so that it can survive the departure of its founder.

Overall, “Start With Why” is a great and motivating read for those looking to be inspired wherever they are. Highly recommended.