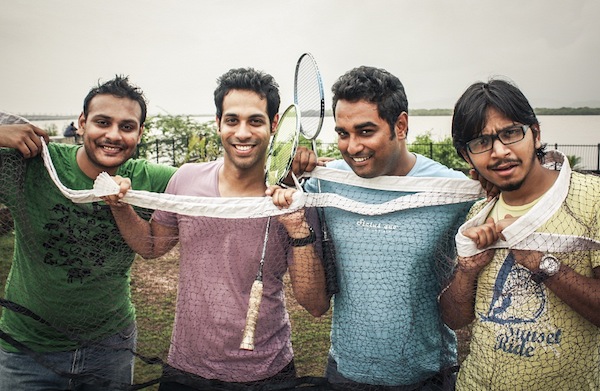 If you love movies that have an entrepreneurial theme in it – “Jerry Maguire“, anyone? – you should look out for this upcoming independent movie: “Shuttlecock Boys” from India by director Hemant Gaba.

“Shuttlecock Boys” revolves around the lives, successes and failures of four friends who hail from lower middle class backgrounds in Delhi. The protagonists Gaurav, Manav, Pankaj and Loveleen seek answers to whether they should accept what life offers to them on a platter or instead try and chase their dreams, even as they decide to embark upon an eventful journey that will change the course of their lives and careers forever. The one thing that unites these four friends is their common love for badminton, a way to pass the evenings of their otherwise dreary lives.

“After being stuck in 9 to 6 monotonous jobs myself for few years, I realized that lot of people including me actually want to do something on their own in lives instead of being succumbed to the slavery jobs,” explains director Hemant Gaba. “But it is very tough to muster the courage to follow the heart that leads to the road to uncertainty.”

“The middle class of India has always taught their children to stick to secure jobs and not take any risks. I wanted to create an experience of the energy and vulnerability of the youth who want to take the less traveled road in making their career choices,” he adds.

“The kind of friendship the four protagonists share in Shuttlecock Boys also comes from my own growing up years.”

The movie was shot on more than 18 locations in just a span of 22 days in New Delhi, Gurgaon and Noida, and made with just a budget of 3.5 million India rupees (around US$65,000).

Singapore-based entrepreneurial groups or communities are welcome to organize limited private screenings from 1 November to 22 December 2012.