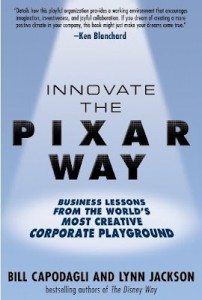 From its first animated feature Toy Story to Finding Nemo, Up, and Cars, Pixar Animation Studios is probably the world’s leading producer of animated features. Renowned for producing cartoon movies that stir the imagination and touch the heart, Pixar’s ability to allow “artists and geeks” to flourish makes it one of the world’s most innovative organizations.

The secrets behind Pixar’s success is ably captured in “Innovate The Pixar Way“. Written by Bill Capodagli and Lynn Jackson of “The Disney Way“, the book relates how Ed Catmull, Alvy Ray Smith and lengendary animator John Lasseter created a company which captures the imagination of childhood while making dreams come alive.

The terrific trio did this by embracing four key principles:

To dream “for infinity and beyond”, one should not compromise long-term dream for the sake of short-term gains. From the onset, Pixar’s goal is to “combine proprietary technology and world-class creative talent to develop computer-animated feature films with memorable characters and heartwarming stories that appeal to all ages.”

With the mantra that “quality is the best business plan”, Pixar established a clear vision, built a creative climate, and forged strong esprit de corps centered around mutual respect and trust.

2. Believe in Your Playmates.

Like kids playing in a sandbox, Pixar invests heavily in employee education and training for all employees with Pixar University. Here, the institution develops proficiencies in depth (mastery in a principal skill or subject), breadth (a wide array of experiences and interests), communication (focusing on the receiver), and collaboration.

With a strong emphasis on values, Pixar stood up against “bullies” like Jeffrey Katzenberg (previous head of Walt Disney Studios) and did what was right rather than popular.

3. Dare to Jump in the Water and Make Waves.

To encourage innovation, Pixarians are told to “try, learn and try again”. Failure is celebrated just as much as successes, and play is a key feature of the company’s culture with its offices and studios designed like a corporate playground. Workspaces are personalized and zany (think tiki huts, pagodas and circus tents), milestones and birthdays are celebrated, while fun is not a “four-letter” word.

In this section, we’re also given 41 ideas to boost our innovative processes. Some of the more memorable ones include:

4. Do Unleash Your Childlike Potential.

Here, innovation is embodied by intangible measures of leadership, quality, and mutual respect coupled with tangible budgetary and production metrics. To “make a dent in the Universe”, Pixar invests in developing fully engaged and interested teams to create “blockbuster” results.

Once again, the section ends with various pointers on building an innovative organization. They include:

Other than Pixar, Capodagli and Jackson also highlighted salient aspects of innovative companies. Google, Nike, Target and Zappos are cited as examples of “Corporate Playgrounds” (love that word!). What seemed clear is that these organizations place a heavy emphasis on teamwork, internal service, fun and spontaneity while not forgoing discipline and hard work.

Peppered with lots of inspiring quotes, “Innovate The Pixar Way” provides useful tips on building a more innovative and imaginative organization with Pixar as a sterling example. Their imaginative and innovative spirit is probably best embodied by this quote from the legendary Walt Disney, the world’s most beloved innovator:

Too many people grow up. That’s the real trouble with the world. They forget. They don’t remember what it’s like to be twelve years old.