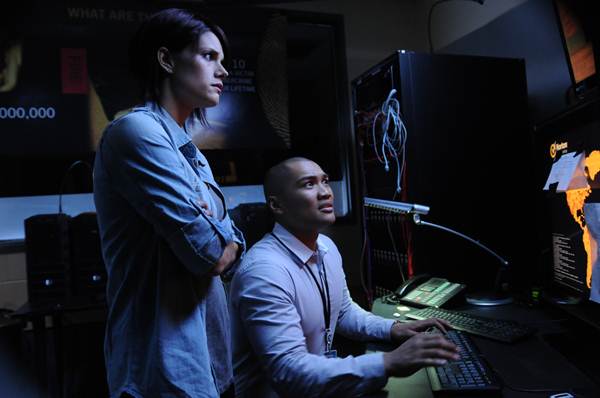 Movies about computers and the Internet have always captured our imaginations. Maybe it has something to do with how darkly realistic such a digital future can be, whether it’s about computer espionage, cybernetic oppression or even *gasp* cyber war. Can anyone remember “The Net“, “Sneakers“, or even “WarGames“? Here’s another one that may give you the digital shivers – Cybergeddon is a new blockbuster about the growing threat of cybercrime that premieres globally today on Yahoo!.

Starring Olivier Martinez and Missy Peregrym, the first three chapters of Cybergeddon premiere today with the remaining chapters being released on September 26th and September 27th – three per day. follows the story of agent Chloe Jocelyn as she investigates a slew of seemingly unrelated cyberattacks with fellow agent Frank Parker and incarcerated master hacker Chase ‘Rabbit’ Rosen.  Chloe and her team must crack the worldwide cybercrime ring led by Gustov Dobreff before it is too late.  In a world where everyone is connected, everyone is at risk.

This series comes from Anthony E. Zuiker, the guy who created hit crime series CSI – and his production company Dare to Pass in partnership with Dolphin Digital Studios and online security company Norton by Symantec, which was involved throughout the creative process to lend technical insights.

For a more holistic entertainment experience, there’s also a social game – on iOS and Android – where fans of the show can join the characters on a mission to fight cybercrime.