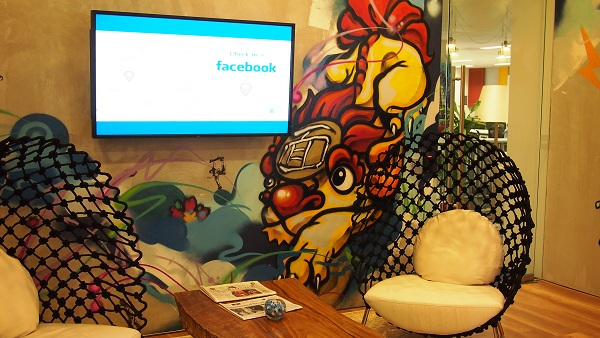 Facebook earlier this week opened the doors of its Singapore office to media for a familiarization tour, where executives took the opportunity to give us a brief rundown of the company’s attitude towards work culture. It’s not often we get invited to visit the office of a technology giant, but when we do – and are actually allowed to take photos anywhere – we naturally jumped at it.

It’s probably important to note that the technology company first moved into its existing premises in Singapore’s central business district area during Independence Day last year – July 4, 2011 (edit: so apparently there was a media event previously, guess we just weren’t invited then). A PR minder told us that prior to this tour visitors were required to sign a non-disclosure agreement form before being allowed into its offices, with photography strictly prohibited (although there were several instances media have conducted photoshoots or interviews on the premises).

The reception area (above) was a colorful surprise, painted as it is with vibrant art by local street artists. 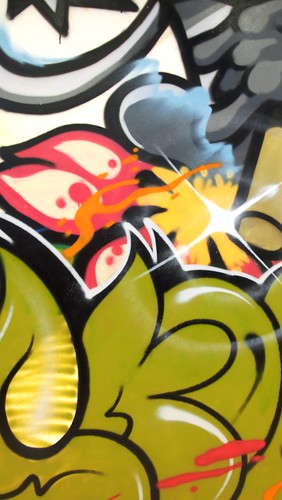 In fact, much of the office was similarly decorated – a vast departure from the normally staid, straight-laced corporate offices of the many Asian technology companies headquartered here in Singapore. 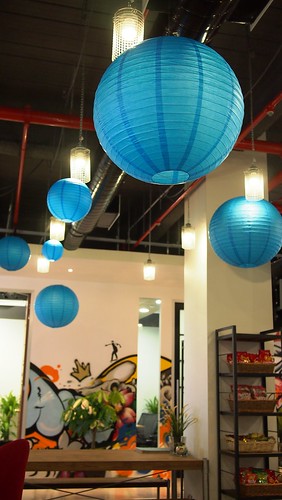 Our visit also coincided with the Chinese Mid-Autumn Festival, which explains the lanterns (in Facebook corporate blue) hanging from the ceiling. 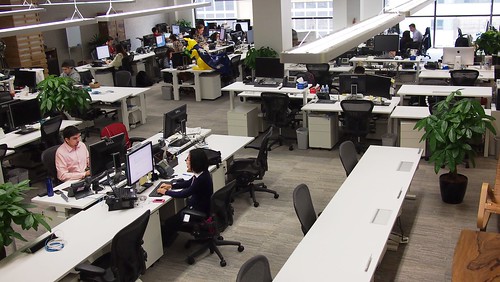 The common working area is vast. The open office concept is open in every sense of the word: every executive, regardless of rank, sit at identical workspaces, underscoring the company’s belief for egalitarianism and collaboration. That’s right, there are no cubicles or private offices for senior staff – you can imagine how a senior executive transplanted from an Asian office culture (say from Japan’s Sony or South Korea’s Samsung) breaking down in an apoplectic fit when they first find out they’d be sitting next to a low-level code monkey. 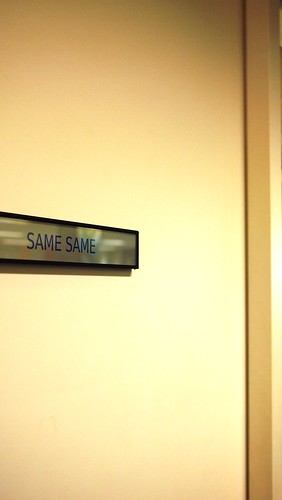 Even the meeting rooms are named tongue-in-cheek. Here’s “same same”, a very Thai or Vietnamese reference. Other rooms are named “suka” (“like” or “love”  in Bahasa Melayu or Bahasa Indonesia), “shaken not stirfried” (probably a Chinese take on James Bond) as well as “I’ll be bak choy” (another food-related pun on Arnold Schwarzenegger’s Terminator). 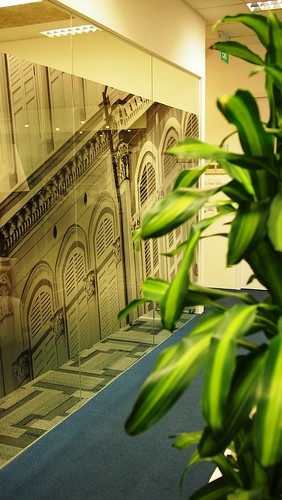 You’ll see that the office also takes on plenty of local flavor, depending on where the office is based. As its Singapore office borders the many shophouses on one side of the central business district, some of the glass walls of its meeting rooms feature art of the colonial architecture of those shophouses. 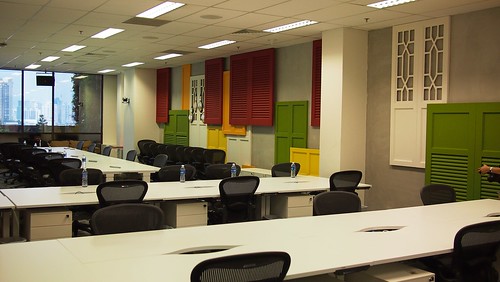 Here’s a wall decorated with repurposed vintage doors and windows of those colonial-era shophouses. Executives tell us that much of the space is designed to look deliberately unfinished, to represent “work-in-progress”. 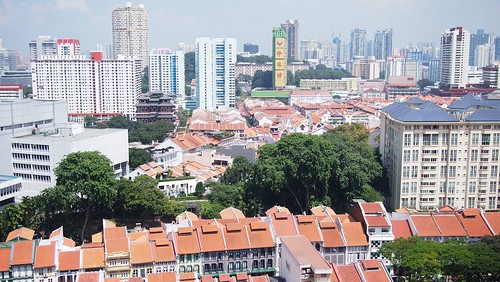 You can see some of those shophouses from the office roof on the 14th floor. That’s the view of Singapore’s Chinatown. The other view, of course, is of the very modern, very high-tech and ostentatious financial district. 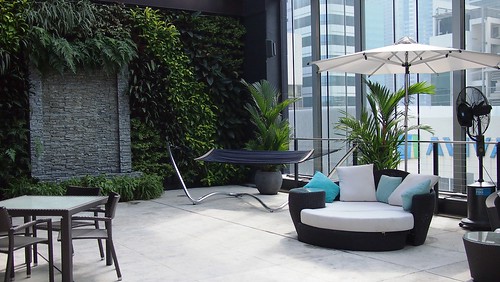 Speaking of the roof, there’s a wonderful outdoor area where staff can relax or even hold meetings. The hammock (pictured above, in the center) is a favorite among the staff for snatching a quick nap. 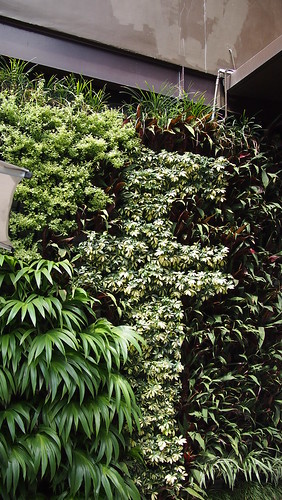 And on the wall on one side of the rooftop area is a plant fixture depicting Facebook’s logo. Neat! In fact, they’re very focused on greenery and the environment. 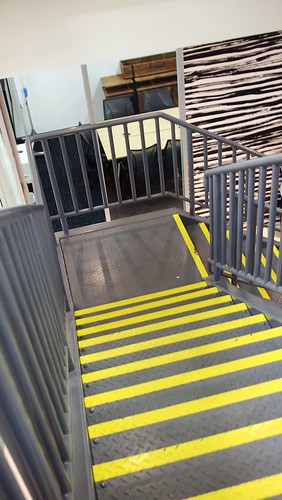 A staircase connects both 13th and 14th floors, promoting connectivity and collaboration. Its style is one more commonly found in factories, denoting that it’s a workplace after all and productivity is still paramount. 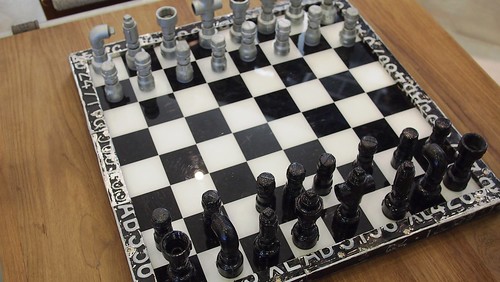 But cosy seating options in different spaces allow team members to relax and collaborate (or indulge in a game of chess). 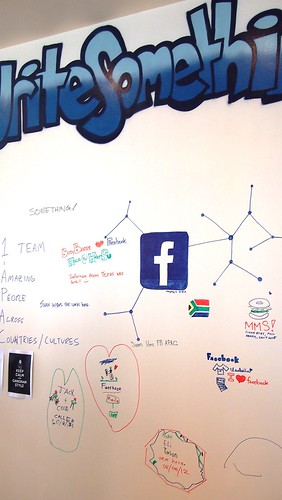 A graffiti wall – a physical Facebook wall – invites team members to doodle or scribble down their thoughts about work and life. It’s also to promote idea-sharing and inspiration. 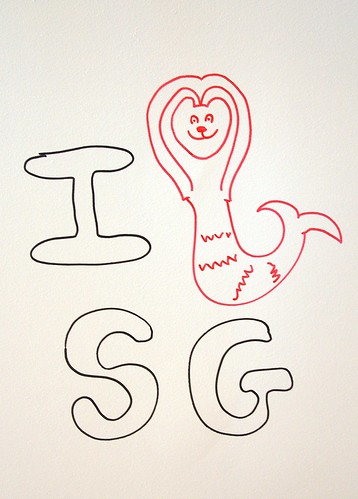 One team member obviously loves the country in which he or she works. 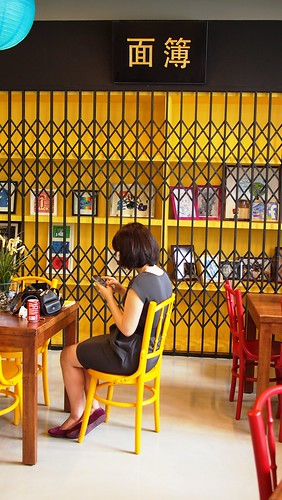 One side of the office pantry showcases the art by Facebook employees, shielded by an antique sliding metal grille commonly used by colonial-era shophouses for security (which really wasn’t very secure). There’s old-school coffee shop chairs and tables for seating. 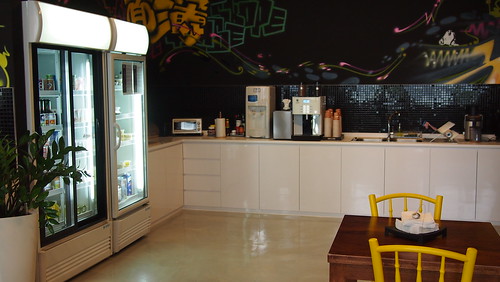 A more modest pantry compared to the likes of Google (which has its own in-house chef even for its Singapore office), but far better than most offered by Asian technology companies. There’s free flow of drinks and snacks any time of the day.