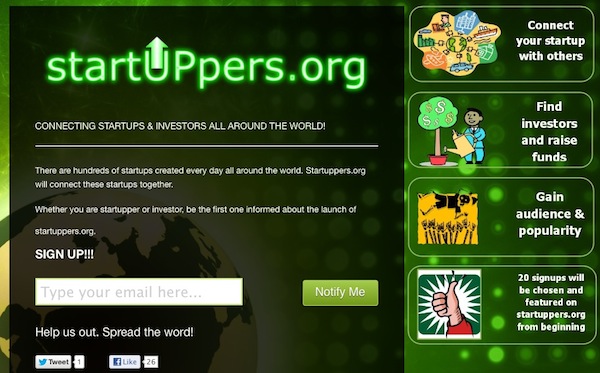 Here’s yet another new resource for startup folks – Startuppers.org is a new social network geared towards startup entrepreneurs. Touted as a new way for people in the startup ecosystem to communicate with one another, networking with each other, and creating connections and sharing advice within the community.

Created by Bratislava, Slovakia-based Marek Novotny, it’s meant to help plug a gap he saw in the ecosystem. “I personally attended Startup Weekend in Bratislava and realized that something is missing,” Novotny remembers. Marek said. “During the weekend, startups were looking for beta testers so that they can present relevant data in their final pitch, but they had to rely on people attending the Startup Weekend.”

“And after the Startup Weekend, the publicity and possibility to present themselves in media, was given only to the winners. So I realized, the startup scene really (needs) a place where all ‘startuppers’ can socialize, connect to each other, ask others to test their applications, and of course, present their ideas even if they are just small startup without massive number of friends or media support.”

“And that’s how Startuppers.org idea was created.”

“We would like to give any startup a chance to present itself to public, to other startuppers and to investors. Nobody will be rejected and literally anyone can join the network, publish news and articles, create startup events or even search for employees for their startups,” adds Novotny.