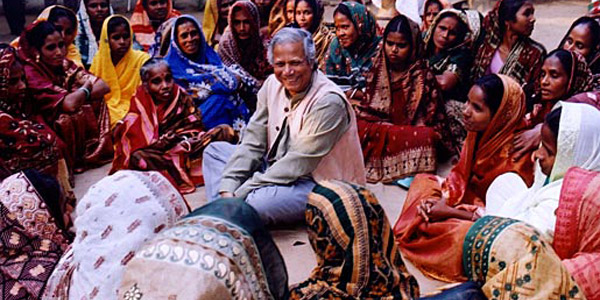 While it is admirable to build a successful business of any kind, some entrepreneurs do more than just make a profit with the fruits of their labor. Some actually help others, bringing resources, opportunities, training, and other assets to those who need them most. These social entrepreneurs use their know-how and business savvy to make the world a better place, combining a traditional business model with a pressing social mission in ways that have been helping to make big changes in places around the world for decades.

Here, we highlight just a few of the standout social entrepreneurs who’re showing that successful businesses don’t have to just watch the bottom line and can truly be socially and environmentally conscious:

Bill Drayton isn’t just a great example of a social entrepreneur, he actually helped to define and promote the term itself. Drayton is the founder and current chair of Ashoka: Innovators for the Public, an organization that is dedicated to finding and helping social entrepreneurs around the world. Drayton spreads out his social entrepreneurship expertise in other organizations as well, working as a chairman at Community Greens, Youth Venture, and Get America Working! in addition to his duties at Ashoka. As of 2010, Ashoka Foundation has sponsored 2,145 fellows in 73 countries, some of which have gone on to develop leading social businesses that have made a huge impact on communities around the world.

Bring up social entrepreneurs and one of the first names you’re likely to encounter is that of Muhammad Yunus. Yunus has quite literally written the book on social entrepreneurship, sharing his expertise in microfinance and social capitalism through a number of books. Yunus is the founder of the Grameen Bank, an institution that provides microcredit loans to those in need to help them develop financial self-sufficiency. Founded in 1983, the bank has brought in a net income of more than $10 million, and his work with the organization landed Yunus a Nobel Prize in 2006.

TOMS founder Mycoskie makes this list because, unlike many of these other ventures, almost everyone with an awareness of pop culture has heard of this social brand. Its popularity has spread like wildfire, which is a good thing both for Mycoskie and for the people that TOMS aims to help. Mycoskie founded TOMS in 2006 after a visit to Argentina where he learned that many children get sick or injured because they do not have shoes to wear. To combat this, he created TOMS, a business that donates one pair of shoes to needy people for every pair that’s bought. So far, the company has donated more than a million pairs of shoes. In 2011, the company launched another initiative which aims to give away a pair of glasses or sight-saving surgery for every pair of sunglasses or glasses sold.

Lack of clean and accessible drinking water is sadly something that millions of people (some estimates put it at more than a billion) worldwide face every day. After a moment of clarity in Liberia, club promoter Scott Harrison decided to make it his mission to change that, heading up the non-profit organization charity: water. Since it began, the charity has delivered clean drinking water to more than a million people in 17 different countries around the world. Harrison is perhaps one of the most successful social entrepreneurs of all time, with his organization growing more than 100% in the first quarter of 2011, despite a major economic crisis that paralyzed many similar ventures. Harrison says he regards charity: water as a for-profit startup that has no profits, saying, “We give away 100% of our profits. Our shareholders are people in 17 countries around the world waiting for a rig to drive into a village and provide clean water to a few hundred people living there. We use the word business so much more than nonprofit, even though that’s what we are.” The model seems to be working for him, and Harrison has quickly created a new model for social entrepreneurs to emulate.

In 1988, Jeffery Hollender founded cleaning, paper, and personal care products company Seventh Generation. The company focuses on producing products that have a reduced environmental impact, avoiding the harsh chemicals that are part of many of today’s leading cleaning and personal care products. In addition, the company donates 10% of pre-tax profits to funding nonprofits and businesses focused on the community, the environment, and responsible practices. Despite adhering to practices that many businesses claim limit profits, Hollender and his associates have built Seventh Generation into a major corporate force, bringing in over $150 million in revenue in 2010. Hollender was pushed out of his role at Seventh Generation in 2010, but that doesn’t mean he’s slowed down in social entrepreneurship. He helps with the American Sustainable Business Council, writes books on responsible business practices, and is a member of the Social Venture Network and founder of the Community Capital Bank.

B corporation Better World Books is an amazing example of a truly successful social entrepreneurship venture. Founded in 2002 by Notre Dame grads Xavier Helgesen, Chris “Kreece” Fuchs, and Jeff Kurtzman, Better World’s mission is to maximize the value of every book out there and to help promote literacy around the world. The company works by reusing or recycling books through sales on their website and donations to schools, and so far has used 84 million volumes to raise $12.1 million for literacy funding. The company attributes its success to using a “triple bottom line” model, caring not only about profits but also about the social and environmental impact of everything they do.

One of the pioneers of the now thriving microfinance world was Akhtar Hameed Khan, the dedication to which and his activism in developing rural communities in Pakistan earned him a nomination for the Nobel Prize. Two of Khan’s most major projects during his life were the Comilla Cooperative Project and the Orangi Pilot Project. The Comilla Cooperative aimed to build local infrastructure in rural communities while also helping businesses grow through microfinance initiatives. It would ultimately be unsuccessful, but would be a major learning experience for Khan as he would move on to other projects, including Orangi. In contrast to Comilla, the Orangi Pilot Project would be quite successful, helping a squatter community solve their own problems with sanitation, health, and housing, while offering microfinance, education, and family planning. Some aspects of Khan’s plan are still in use today in areas all over Karachi.

Early in his career, Ibrahim Abouleish was working in leading pharmaceutical firms in Europe, developing new treatments for osteoporosis and arteriosclerosis, but a trip to Egypt in the mid-’70s would change that. He would leave Europe and move back to Egypt, founding the development initiative SEKEM (Ancient Egyptian for “vitality from the sun”). Abouleish hoped that by using biodynamic farms, schools and vocational training centers, a medical center, and trading company that he could not only help repair the environment but also the lives of the Egyptian farmers in those areas. SEKEM grows plants that are developed into herbal teas, fresh produce, and even organic cotton, which helps to sustain the other facilities it hosts. Abouleish has also played a key role in developing new chemical-free methods to process cotton and developing Egypt’s first private pharmaceuticals company. His business has been so successful that experts and ideas from it are being exported to South Africa, India, Palestine, Senegal, and Turkey.

Microbiologist Willie Smits never really expected to become a social entrepreneur, but when he found an abandoned baby orangutan in 1989 while working in Indonesia, his career would quickly alter direction. Smits’ work with orangutans would blossom into the Borneo Orangutan Survival Foundation, which not only works to help orphaned or imperiled apes, but also helps locals learn sustainable farming methods and the benefits of reforestation. Smits also takes part in the Masarang Foundation, an amazingly innovative social entrepreneurship enterprise that uses thermal energy to turn sugar palm juice into sugar and ethanol, providing jobs and power to the community while preserving the local forests. In recognition for his work, Smits has received knighthood in his native Netherlands as well as an Ashoka Fellowship and a variety of other conservation-based awards.

Indian social activist and entrepreneur Sanjit “Bunker” Roy has helped thousands of people in Asia and Africa learn vital technical skills and bring solar power to their sometimes remote villages. Roy founded the Barefoot College, an organization which specializes in teaching illiterate women from poor villages how to become doctors, engineers, and architects. What’s more impressive is that each of the college’s campuses are solar powered and often built and designed by former students. In founding the college, Roy’s goal wasn’t to make a profit for himself, but to help improve the economic production and quality of life of women throughout his native India (though some aspects of the project have spread to Africa as well). With women leading and running most of the Barefoot College’s operations, it’s clear that he’s been pretty successful in achieving that goal.

Returning To The Job Market? 5 Tips To Leverage Your Skills...