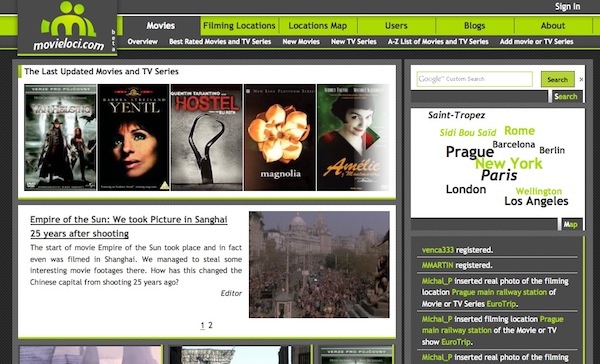 I remember when The Lord of the Rings trilogy first came out, viewers were totally in awe of the magnificent, soaring landscapes in the movies. We were more impressed to find out that some of the actual scenes in the film featuring those landscapes were actually shot on location in New Zealand. For some, that awe even translated into Tolkien tourism – where fans of the franchise traveled to sites of film- and book-related significance to relive a bit of that fictional universe.

The question for movie fans is then: wouldn’t it be fun and interesting to know where various scenes in your favorite movies were filmed? If the answer is yes, you may want to check out Movieloci (www.movieloci.com). Movieloci is an online community site where you can upload images of a scene in a movie and crowdsource an answer of where the scene was shot. If people recognize the location, they can add an exact address as well as GPS positioning of the filming location. To have an idea of how Movieloci works, check out the 1953 movie Roman Holiday featuring Gregory Peck and Audrey Hepburn.

Movieloci is launched as the English version of the Czech project Filmová Místa.cz (which contains some 1,000 mostly Czech movies and TV shows featuring 15,000 film snapshots and over 10,000 filming locations since 2006). The team is looking at introducing mobile versions for the online service, firstly on iOS and followed by Android and Windows Phone versions.