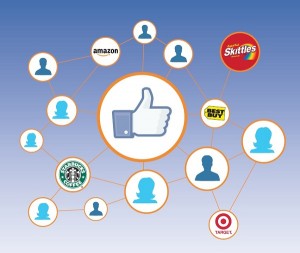 Everybody loves a thumbs up – but brand marketers especially love those on their Facebook page updates denoting interest from, and engagement with, consumers. The question is: does such interaction have any significance on purchasing behavior? Will clicking on the Facebook Like button lead to consumers streaming down to the nearest store to buy a certain product?

The first Power of Like study conducted by digital marketing intelligence company comScore released last year showed there was a definite correlation between being a fan of a brand, or a fan’s friend, and buying from that brand. For example, they found that fans of Best Buy spend 131% more in Best Buy stores and online compared to the average Internet user.

1. A fan or a fan’s friend of a brand drives them to buy more from that brand in store and online (Earned Media):

o In the four weeks after seeing Starbucks messages on Facebook, fans of Starbucks and their friends overall bought at Starbucks 38% more frequently.

o In the four weeks after seeing Target messages on Facebook, Target fans and their friends overall bought at Target 21% more frequently.

o    In the four weeks after seeing an ad on Facebook from a major offline US-based retailer, fans and their friends overall bought 16% more frequently.

o    And they bought 56% more frequently online from this retailer.

You can find out more of such analysis in Power of Like II.