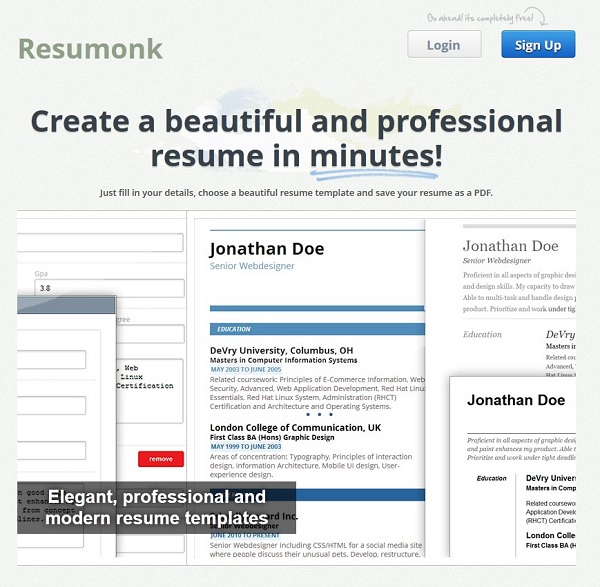 My wife works in Human Resources and she constantly complains of having to go through stacks of ugly resumes. Of course, she isn’t referring to the profile photos that sometimes accompanies those curriculum vitaes but how badly put together some of those resumes can be. Well, here’s a web application that may help some of those people – Resumonk (www.resumonk.com) is a simple and easy-to-use online resume builder that puts together a professional-looking resume in a matter of minutes.

What do we like about this? The web application not only handles the formatting of the resume for you – a drag-and-drop template editor makes layout a breeze – it even lets you easily share your resume online or download as a PDF document, and includes a LinkedIn import. Winning feature? The ability to create and manage multiple resumes. That’s a good thing, because it’s always a good idea for job applicants to customize their resumes according to different jobs and industries after all.

Resumonk was developed by Bharani Muthukumaraswamy, who had a really hard time trying to format his resume using MS Word when applying for summer internships last year. “I also tried using a few of the resume builder that are available online, but I was not satisfied with any of the existing ones and I thought that I could create a better and simpler resume builder,” says Muthukumaraswamy. He adds that CVs uploaded in job search sites and those placed with headhunter agencies end up in a closed system and cannot be used elsewhere, and Resumonk gets round those problems.

It took Muthukumaraswamy just two weeks to put together the first version of Resumonk, and since then have been working constantly to fix bugs and add new features. “I am primarily a designer, so the biggest challenge I faced was to teach myself how to code and to understand the ideas and philosophy involved in programming and building a web application,” he laughs.

Muthukumaraswamy is currently working on a cover letter generator to complement Resumonk, which automatically generates a cover letter by extracting the highlights from a resume. “I also plan to release a widget soon that will help users embed their resume on their website,” he says.

I don’t know about you, but if I were LinkedIn I won’t just be offering him an internship – I’d offer him a job or even buy him out!