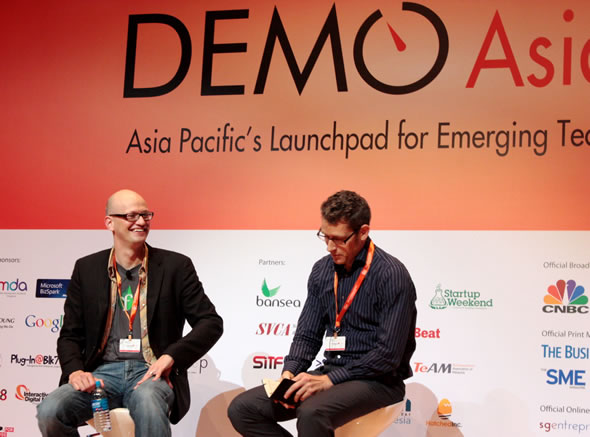 We managed to catch Adeo Ressi, CEO of The Founder Institute and CEO of TheFunded.com briefly at the sidelines of DEMO Asia 2012 to get his views on the startup scene here in Asia.

Quality Of Ideas The Same?

Although Adeo expressed in earlier interviews that the quality of ideas, whether in Silicon Valley, or Europe, or Asia are the same, he thought that it is more “fine tuned” now as The Founder Institute is operating in 25 cities. Adeo feels that there are some differences in ideas in different markets but on the whole, it’s “more consistent than you would imagine”.

He also believes that some of the most innovative ideas are coming out of Paris and the highest rate of ideas being funded are in Berlin and in Singapore, the latter due to the active involvement of the government.

The Founder Institute now has three chapters in this region, namely Singapore, Vietnam, and Jakarta. Adeo believes that companies in Singapore are very strong and we have the highest funding rate due to the various government programs. This is both good and bad, since in places where funding rates are lower, entrepreneurs are forced to make “OK” ideas better.

But in Singapore, since it’s relatively easy to get some capital, it encourages people to have “OK” ideas which may be good, but not necessary great. As a result, these entrepreneurs are allowed to pursue mediocre ideas, which keeps them in a comfortable state for too long. They are delaying the inevitable and will eventually run out of money before they “fix themselves later”.

Adeo feels that the jury is out on how good or bad our government programs here are as he is a firm believer that the market should ultimately correct mistakes. Ultimately, Singapore is supported by artificial market dynamics.

Although there are many factors (including good weather), Adeo attributes Silicon Valley’s success to three main aspects:

What Singapore Needs To Do

Contrary to popular opinion, Adeo feels that Singapore’s market size is an advantage. Because our local market is so small, startups here are forced not to focus on Singapore and as a result they need to leave Singapore very quickly. Adeo advises startups to think about at least two or three markets in your region to be really viable. He feels that most companies realize this but don’t execute on it as fast as they should.

End of the day, Adeo believes that Singapore has the potential to be a regional hub for entrepreneurs.

For more information about DEMO Asia 2012 in Singapore, check out this page on SGEntrepreneurs.