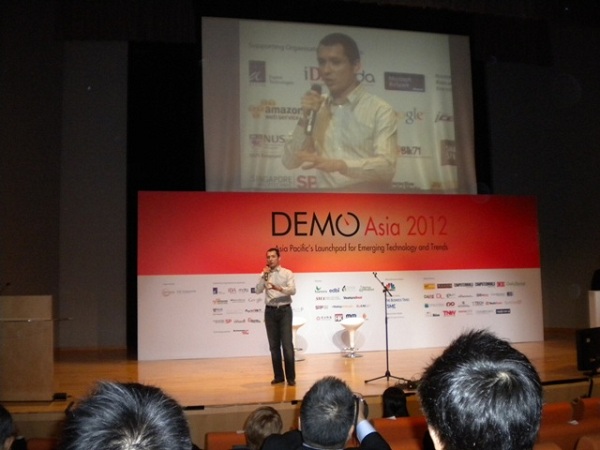 DEMO Asia, the biggest startup event in the region, had no lack of outstanding and memorable pitches. We got hold of five startup founders to share with us some tips on how they prepare and deliver their presentations:

Alexie Dunayev, CEO of TranscribeMe, uses two sentences to answer each of these questions:

You have a lot of features that you will find it irresistible to remove from your pitch, but you only have so little time to spare. Michael Kleist, founder of TradeSparq, solves this problem by pitching only most important features. He made a list of all his product features, prioritized them and chose as many important features as he could fit into the time frame.

CuteChat allows video chat users to change their background, creating the illusion that users are somewhere other than where they really are. To create an element of suspense, CEO Lee Boon Leng had his chat recipient pretend that he was at various locations. This made the audience suspect if there was a green screen involved, which he then amaze the audience by revealing that there was none and on top of that, there was another person in the scene completely hidden by the background.

People react to stories, so make your pitch into one! Kleist, whose startup helps merchants find trusted suppliers based on the merchants’ social networks, put the audience in the shoes of a merchant buying kitchen sinks and walks them through the purchase process with and without TradeSparq.

To help him be less nervous on stage, Kleist only memorizes the first two sentences of his pitch. He’s not worried about forgetting what his product and startup does, so there was no disadvantage in not memorizing the entire script. “Memorizing the first two sentences of the pitch is crucial so that you don’t start off fumbling and waste the entire pitch trying to catch yourself,” cautions Kleist.

“Write the script one week earlier, but only memorize it a day before. So you’ll have the entire week to iterate,” advises Dunayev of TranscribeMe. During the week before DEMO Asia, Dunayev would pitch to anyone who would listen to get feedback. From the feedback, he iterated and fine-tuned his script.

Liezl Buenaventura, founder of HobbyMash, delivered her pitch like how she speaks to people. This helps in giving that human touch in her presentation. To make sure that she achieved that, Buenaventura avoids all buzzwords in her pitch.

8. Show excitement in your voice.

Buenaventura also shares that because your pitch is a story, it has a climax and a turning point. So in your pitch, highlight parts of script are exciting by showing that in your voice.

9. Practice how you look.

10. Bring on the atmosphere.

Charmain Tan, founder of Fiett, presented the audience her product ISGloves, a winter gloves that allows the usage of touchscreen devices. To allow the product to speak for itself best, Charmain brought out the winter atmosphere by wearing a winter jacket, completed with boots, for her pitch.

Elisha Tan is the founder of Learnemy, an online marketplace that connects you with instructors for anything you want to learn. She believes that people should be able to make a living by doing what they like to do. Hence, she hopes to provide a platform for people to monetize their skill sets by teaching.