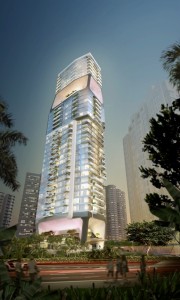 Here’s more proof that work, play and living are coming together as one – Singapore-based property developer Far East Organization today unveiled The Scotts Tower (TST), a new SOHO (small office, home office) property that is set to redefine work and living spaces. Located along Scotts Road in the Cairnhill area of Singapore, the 231-unit The Scotts Tower comes under Far East Organization‘s new Far East SOHO branding umbrella, which will introduce new generation SOHO-style apartments in Singapore, as well as other markets in the region such as China and Indonesia.

The Scotts Tower – designed by co-founder and principal architect Ben Van Berkel of Dutch architectural design studio UNStudio – combines the convenience and facilities of an office space, yet with the privacy and functionality of your own private apartment. Facilities include a business concierge that will help residents accept courier deliveries, for example, as well as WiFi-enabled meeting “pods” that you can book to meet with clients, differentiating it from the usual residential-type apartments. In addition, The Scotts Tower employs what the developer calls a “semi white plan” – essentially a largely customizable floor plan with which they would work together with the buyer to create their preferred personal space.

“We are proud to introduce a new era of SOHO-living, and an integrated lifestyle concept in Singapore where living, leisure, working and connectivity converge in one address,” says Chia Boon Kuah, Chief Operating Officer, Property Sales and Executive Director of Far East Organization. “The Far East SOHO brand platform provides the foundation for us to evolve the SOHO market and take our SOHO creations to new heights.”

The concept of SOHO originally came from “South of Houston” in New York City’s Lower Manhattan area, which is notable for its artists’ lofts and galleries as well as chic, upscale and trendy boutiques. Far East SOHO intends to attract creative individuals to its new developments and build similar communities. This also comes off its success in selling off previous SOHO developments – Central, Singapore’s first SOHO development in 2004, as well as The Tennery in Upper Bukit Timah and The Cape located at Amber Road.

Far East Organization executives were quick to point out that changing consumer trends have led to the rise in demand for such highly-connected, highly-functional developments in urban locales. “Far East SOHO is a timely and dedicated movement which we believe will appeal to the aspirations of new Generation Y buyers who yearn to have their own place and greater personal control, as well as the growing number of work-from-home entrepreneurs and young professionals, tech-savvy consultants, designers, creative minds, independent singles, and young couples,” explains Chng Kiong Huat, Executive Director, Property Services of Far East Organization. COO Chia added that over 80-percent of buyers of the Central were locals in the 30- to 50-year old age group, who valued the proximity to the central business district.

While The Scotts Tower is likely to fall outside the budget of most startup entrepreneurs and many small business owners, it’s likely to attract interest from many well-off professionals in the creative, legal and finance fields – and especially those who cannot separate work and living in their lives.