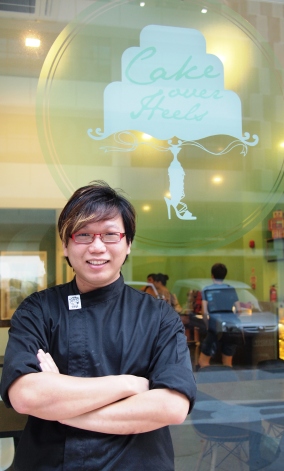 Cake Over Heels is set up by co-owners Nick Ang and Lesley Phay, who picked the location because they needed a bigger space and couldn’t quite bring themselves to pay the sky-high rentals in the city for the privilege. It’s easy to see why – aside from a large industrial kitchen, their current facility also comprises a classroom for cake decorating classes, as well as sufficient seating space for his cafe operations. Rent for a similar space like this in the city, I imagine, would be crippling.

Cake Over Heels‘ core business in the creation of beautiful bespoke cakes that takes the shape of pretty much anything a customer would desire. In fact, the owners insist that their cake designs is the patisserie’s unique selling point. “Others can design cakes too but usually not exactly to the specifications of a customer’s request,” says co-owner and patissier Ang. A look around the premises dispels my disbelief – the half completed and finished cakes in designs of all sorts a weird yet wonderful juxtaposition of a dessert lover’s haven and a gallery with beautiful works of art.

The most requested design? “Designer handbags like Chanel and Birkin,” laughs Nick, who says they sell around one customized cake a day. He also admits that his works don’t come cheap. “Middle-class to high-end,” he quips. “Relatively pricey.” Just like the bags, I reckon.

Originally, the owners didn’t intend to have a cafe as part of the business. They finally decided to cater for one because, aside from the nearby canteen selling local coffee, there wasn’t a comfortable and cosy coffee joint for a nice cuppa and a slice of cake. Today, around 20-percent of the business comes from their cafe operations, while cake decorating classes comprise another 30-percent. 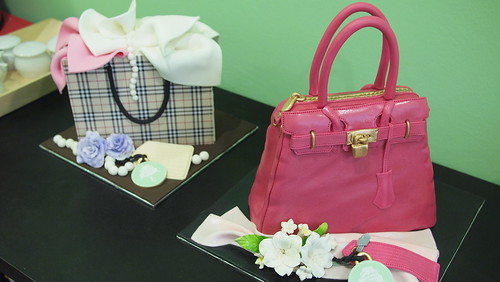 From Design To Baking

An unlikely baker, Ang didn’t start out as a chef – his background is originally in design. He studied design in Singapore’s Nanyang Polytechnic and later spent four years pursuing a graphic design degree in Sydney, Australia. But it was in Sydney that his baking skills came to the fore – he started baking out of boredom in 2002 for a friend’s birthday party, and when the cake received rave reviews he became de-facto baker for gatherings. It was also then that he started selling his cakes to a café near the apartment he lived in, whose owner allowed Ang to sell as many as he could bake. He did that for one and a half years, before he returned to Singapore.

Ang then worked in the advertising world, but he would continue making cakes during the nights and weekends, selling them to friends. After four years in advertising, he realized he wasn’t happy – advertising just wasn’t as creative as he thought it would be, compared to baking.

But the intrepid home baker also knew that if he were to pursue his future as a professional baker he would need professional training, so he flew off to Canada to pursue a 9-month pastry making course. It was in Canada that he also won a national gingerbread house making competition. “They wanted a gingerbread house; maybe I won because I created an entire gingerbread town,” Ang laughs. His years spend in design paid off for him, in a way. “Advertising is also about design. Model-making has helped. Visualization, color skills.”

The accolade also won him a stint in preparing a meal for the then Canadian prime minister Steve Harper, whose personal chef wrote him a wonderful recommendation letter. When he returned to Singapore, that letter clinched him a job at patisserie 1 Caramel, part of the One Rochester Group, where he was tasked to make wedding cakes as creative chef. “At that time, I didn’t have any experience making wedding cakes,” Ang admits. 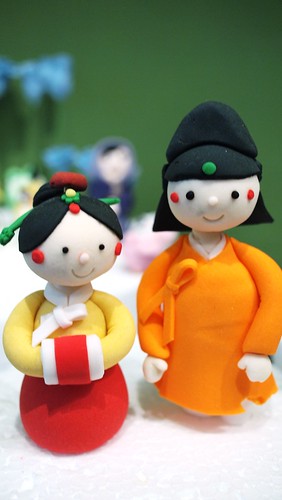 Ang spent one and a half years at 1 Caramel till he left last November, setting the wheels in motion for his own business. He roped in Phay, whom he had met during his university days, because not only she was a passionate baker herself, but Phay was someone he knew was good in administration and sales. The things, he admits, he’s really bad at. So the partners put together S$200,000 as seed capital and finally started Cake Over Heels in May this year.

The biggest challenge right now in growing the business is in marketing, Ang reveals. He’s also spending more of his time on operations as opposed to cake-making. He knows he’ll have reached a level of success when he’s not too involved in day-to-day operations. “Can’t go on vacations or take days off now,” he laments. “It’s nice to control own time but it’s a lot of commitment.”

The 31-year old says that eventually he would like to focus more on cake-making classes, especially those of more advanced levels, which he says are not quite available in Singapore. “Usually hotels fly a famous patissier in for a few days to teach some classes, but that’s about it,” he says.

What about a food television show of his own? “Food Network actually approached me when I was in Canada,” Ang grins shyly. He didn’t take that stint up because he didn’t plan to stay in Canada. “So yes, why not?”